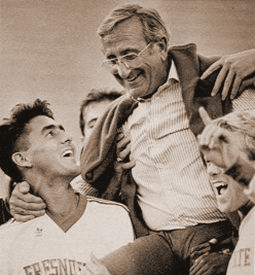 It would be difficult to find a man for all seasons, all people, and all settings who had a greater impact on our community than Jose Elgorriaga. He was often referred to by his Academic associates as the "Renaissance Man," but that didn't really encompass all this icon accomplished. Elgorriaga was able to carefully juggle his professorship in the Fresno State foreign language department with coaching the Bulldog soccer team to national recognition.

Teaching was his first love. He was right at home whether in the classroom, on the soccer field, or in a social gathering. He was just as comfortable discussing the latest football game with his former neighbor and then head Bulldog football coach, Jim Sweeney, as he was co-authoring a book Flamenco, Body and Soul with world-class guitarist Juan Serrano. In his coat and tie, he often read a collection of poems to a standing-room-only audience of poetry lovers in Fresno State's Arena Theater. On the flip side, he was named 1986 Men's Collegiate Coach of the Year by Soccer America magazine. Fresno drew the largest collegiate soccer crowds in the nation with a record 12,224 fans in Bulldog Stadium to watch four-time national champion University of San Francisco play his team. The following year, Fresno recorded a first when it was the pre-season #1 by Soccer Magazine.

Jose was born and raised in Spain during the revolution, when his family was forced to flee the country. His son Chato, one of a string of outstanding goalies to play at Fresno State, said of his father: "His strength was recruiting, getting players who were achievers and very good athletically. We were always in better shape than the teams we played. He was always good [at] giving tactical speeches. A good game planner, always able to tap the emotions of the players on the field. During the four years I played and then helped coach, I can't recall any time we felt there was a team we couldn't beat. That's why we beat UCLA when they were the national champions [and] Indiana when they were ranked #1. Same for San Diego State."Jose's wife, Carmen, whom he married while studying at UCLA in 1954 added, "I think his success came from his uncanny ability aggravating ability-to concentrate. I think he had a photographic memory. He could replay games play by play. He could remember what his players did and what the opposition did the year before and the strengths and weaknesses."

Elgorriaga's eleven-year record at Fresno State was 170-58-20. His teams won seven conference titles and made eight NCAA playoff appearances. In addition to his National Coach of the Year Award, he was voted Far West Coach of the Year in 1985 through 1995, Big West Conference Coach of the Year in 1985, 1986, 1989, and 1990, and Pacific Soccer Conference Coach of the Year in 1982, 1984 and 1985. He never had a losing season, coached four All-Americans, reached the final four in 1986 and the final eight in 1988. Most of his success came with homegrown players that were not recruited by the soccer powers. He did steal some gems that all schools wanted: Femi Olukai from Football College: Christian Ogbodo, an exciting player who beat UCLA with a Pele-like scissor kick; and Gerrel Elliott from New Mexico. During all home games, Carmen made dinners for the team as well as their opponents. One opposing coach said, "They beat you and then feed you." In 1979, Elgorriaga accepted an assistant coach offer from Bob Bereskin. The following year, Bereskin took a job with an oil company. Elgorriaga figured to coach four or five years and turn the job over to someone else. That didn't happen and Fresno State was better for it. The soccer field at Granite Park was named in his honor. Elgorriaga was the subject of a Sports lllustrated article on November 7, 1986 entitled "Athletics Married to Academics" by Bruce Anderson. The title says it all. Jose Elgorriaga passed away in December 2009.