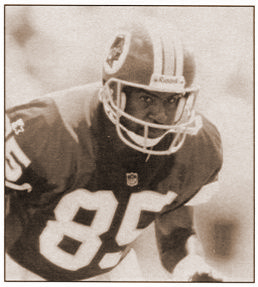 After a record-breaking career as a receiver for Fresno State, Henry Ellard soared to the top of the National Football League, leading the Los Angeles Rams in receiving nine out of the eleven seasons that he played for them. The Rams selected Ellard in the second round (32nd pick overall) in the 1983 draft, launching a career that included three Pro Bowls (1984, 1988 and 1989). By the time he left the team in 1994, Ellard had a firm grip on the Rams record book: first in career receptions (593), first in receiving yards (9,761), most 100-yard receiving yards (26), highest punt return average (11.3), and most total yards offense (11,663).

After the Rams, Ellard's NFL career was far from over. He played for the Washington Redskins from 1994 to 1997, with 1,397 yards receiving in 1994, finishing second by 102 yards to Jerry Rice that year. With Washington, he had three consecutive 1,000-yard seasons and caught 221 passes. Playing wide receiver in the NFL for sixteen years requires toughness, durability, and passion for the game; Ellard had all of these things. "Henry Ellard is the best route-runner ever," long-time NFL coach Norv Turner once said. "No one is better at it."Ellard had an abundance of natural talent, but his work ethic set him apart. "With me, it's all about rhythm, study, and preparation, he said. "Once I get comfortable, I could close my eyes and run certain routes and wind up in the same place every time." Other keys were his quickness and his amazing jumping ability to snag those flying footballs.

Growing up in Fresno, the youngest of nine children, Ellard spent his free time on the field, court, or track. At Hoover High School, Ellard was an AlI-North Yosemite League running back and receiver in football and a multi-event track star for the Patriots. Colleges offered scholarships in both sports. Fresno State University track coach Red Estes and football coach Bob Padilla were both after Ellard. They devised a plan in which Ellard competed in football and track with the agreement that he could skip spring football practices, so he could run and jump for the track team. "Henry was just a great young man with incredible talent and a willingness to work and learn," Estes said. "Even though he was a star football player at Fresno State, he stayed committed to track all four years and was one of our all-time best performers."He was a member of the Bulldog 4x I relay team, was a champion in the long jump, and set a Fresno State record in the triple jump at 55.5 feet.

Coincidentally, ten years after setting that Fresno State triple jump record and more than halfway through his sixteen-year career in the NFL, Ellard qualified for the Olympic Trials with a triple jump of 54.1 feet. Missing spring football practice did not slow Ellard's college career. His name is scattered throughout the Bulldogs record book, including career touchdown passes caught (25) and most receiving touchdowns in a season (15 in 1982). From 1979 through 1982, Henry kept Bulldog quarterbacks Sergio Toscano and Jeff Tedford and opponents' defensive back fields busy while he was attaining All-American status. In 1982, Ellard set a National Collegiate Athletic Association record with 1,510 yards receiving. He broke the mark for average yards per catch with 24.2-an all-time NCAA record for those with a minimum of fifty catches. In 2000, Ellard returned to Fresno State to coach the receivers and then, in 2001, was hired as the wide receivers coach for the St. Louis Rams. "I built up all this knowledge in sixteen years that I am obligated to pass on; I can't keep it to myself," Ellard said. "I was blessed to play as long as I did, and I think it would be a great compliment to have someone learn so well that they do it better than I did."