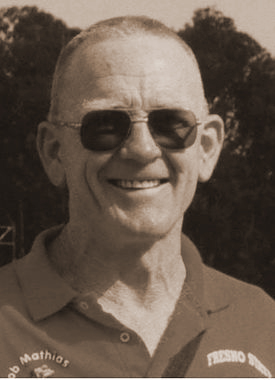 The Craigmount/Lewiston, Idaho native believed in teamwork, loyalty to staff and athletes, and keeping a low profile during an extraordinary coaching career at Fresno State capped by his induction into the U.S. Track and Field Hall of Fame in 2000.

Estes competed in the discus and shot put at the University of Oregon in the 1950s, then served in the U.S. Army as an officer and coach. While with the Army, he competed and coached in military track and field meets that featured some of the world’s top competitors of the early 1960s.

After a stint assisting the innovative Bill Bowerman back at Oregon, Estes joined another legend, Dutch Warmerdam, at Fresno State in 1964 as an assistant in track and field and head cross country coach. In 1980, he succeeded “The Flying Dutchman” as head track and field coach while remaining in charge of cross country.

Despite having tight budgets, Estes built powerhouse programs with the Bulldogs. While he was the head coach, Fresno State won a combined 17 conference championships in track and field and cross country. And he garnered Coach of the Year honors 16 times in the PCAA, Big West, and Western Athletic conferences.

In an effort to boost funding for the sports that the loved, Estes started and ran a community drop-off recycling center for many years. He also labored for many years. He also labored long hours, building runways, vaulting pits, and hammer-throw screens, and manicuring fields with his own hands. He kept the spirit and tradition of the old West Coast Relays alive by running the Fresno Relays.

Estes was committed to hiring good assistants - among them Bob Fraley, Tom Pagani, and Hugh Adams - and developing strong dual-meet teams. His dual-meet record in track and field was 188-38-1. That is a .832 lifetime winning percentage, the best of any coach in any sport ever at Fresno State. His coaching of more than 100 All-Americans overall, including seven NCAA individual champions, proved the success of that philosophy. His teams finished as high as fifth in the NCAA outdoor championships and sixth indoors.

p Most of all, Estes was a teacher - in the classroom and on the field. He led by example, inspiring athletes and fellow coaches to new heights. For more than three decades, he put an indelible, positive stamp on Fresno State and the track and field/cross country community. World Cup champion teams.
Honoring the Past
Celebrating the Present
Inspiring the Future
Contact Us
Tel: 559-448-0677
Fax: 559-448-0679
P.O. Box 27258
Fresno, CA 93729
info@fresnoahof.org
Connect With Us
The Save Mart Center