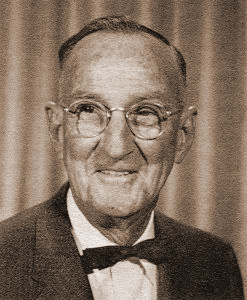 John M. Euless was the right man at the right time with the right connections when professional baseball returned to Fresno in 1941. This was the year that the California League was created and Fresno was selected to be one of the franchise team locations. Euless, who was raised in St. Louis and was thus a Cardinals fan, made the contact which resulted in the St. Louis Cardinals with flamboyant general manager, Branch Richey, sponsoring the Class 'C' local team. It was Euless who gathered the backing from several friends to build Fresno State College Park in time for the season opener and Fresno State was able to play a post-season game there that year. The cozy park which later carried Euless name led the league in attendance, but that was the year that World War II started and the division folded in 1942. Euless was the first president of the Fresno team and continued in that role when the Cardinals resumed play following the war until 1949. Euless was in the real-estate business and a rancher who loved pheasant hunting with his dog beside him. Euless played high school and sandlot baseball and his Euless Realty Company sponsored teams in the popular Fresno Twilight League. John Euless died in 1966.