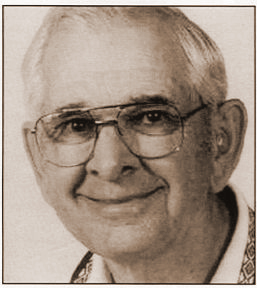 Bruce Farris was a sports writer for The Fresno Bee for fifty-two years, a career distinguished not only by longevity and depth, but by the respect he earned from those he covered and with whom he worked. Sports writers are often barely tolerated by coaches, avoided by athletes, and harangued by sports fans. However, Farris was mild-mannered, humble, dedicated, and impossible to dislike. He was the antithesis of many of his colleagues in the cursing, chain-smoking, two-fisted drinking world of newspaper reporters in the early days of his career. His strongest oath when he was upset or disappointed was Gee Whiz." He was, however, fond of poker as a young man, and often sat in on games with local baseball coaches, especially Pete Beiden of Fresno State. Farris enjoyed the coaches and athletes that he met and considered it a privilege to have a front-row seat to Fresno sports and wherever else The Bee dispatched him.

He was introduced to the newspaper business by his father, Ross, who was a linotype operator for fifty years at The Bee and Fresno Guide as well at print job shops in Reedley, Bakersfield, and the Bay Area. Young Farris began his career at the Fresno Guide, writing sports stories for ten cents an inch while he attended Fresno State College. When Farris was twenty-one, sports editor Ed Orman decided to give him a trial-basis job at The Bee. Farris never left, retiring from the sports department at seventy-three. Although they had contrasting personalities, Orman mentored Farris through the years, often offering more criticism than praise. Farris matured from a wide-eyed novice to a meditative, hard-working sports scribe.

He focused not only on what happened in the games, but the athletes themselves. "I believed that people were interested in the personalities," Farris said, "And what they accomplished and how they got there." Over the years, Farris covered Rose Bowl games, the World Series, NCAA basketball championships, the first United States-Russia track meet, and all levels of local sports-prep, college, amateur, and professional. But his biggest thrill, he said, was reporting the 1961 Mercy Bowl game when Fresno State upset Bowling Green in the Los Angeles Coliseum. He most enjoyed covering baseball, a sport he loved dating back to when he was secretary and public relations man for the Fresno Cardinals of the Class 'C' California League. Later Farris discovered golf and became enamored with playing and covering the game, especially at Pebble Beach. Farris’ favorite athlete was Cornelius "Dutch" Warmerdam, who was born in Laton, but found international fame as a world record-breaking pole vaulter.

As for putting in long hours at the typewriter, Farris once covered a Saturday afternoon USC vs. UCLA football game in the Los Angeles Coliseum, drove to Long Beach to report a Fresno State vs. Long Beach State night game, then got up Sunday morning to work a Los Angeles Rams vs. San Francisco 49er match-up that afternoon back at the Coliseum. For more than five decades, sports page readers were well-served by Farris' dedication and knowledge. He took his audience from courtside at a raucous high school basketball game to the road with the Fresno State Bulldogs to the glorious links at Pebble Beach. Farris is on the Board of Directors of the Fresno Athletic Hall of Fame and is one of the authors of this fiftieth anniversary commemorative book.