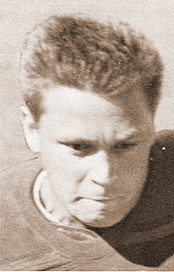 Jackie Fellows wouldn't have been able to see over the hulking linemen that collegiate teams have now, but he was the toast of Fresno and was chosen to Bill Stern's 1942 All-America first team, the only Fresno State player ever so honored. The 5'6", 155-pounder was the kingpin in the Phantom Four" backfield along with running backs, Jack Kelley and Lou Futrell and fullback Mickey Masini. Operating as the tailback in coach Jimmy "Rabbit" Bradshaw's double wing formation, Fellows could pass or run. He was recruited after a stellar two years with Los Angeles City College. Los Angeles writers tabbed Fellows as the greatest junior college player to emerge from the Southern California ranks since Jackie Robinson, who played at Pasadena City College before moving on to UCLA. Fellows passed for twenty-one touchdowns, an NCAA record at the time, and the Bulldogs out-scored their ten opponents 363-45 with seven games as shutouts. Their only loss was to the University of San Francisco. In that game, Fresno scored first, but the Dons' heavy pass rush kept Fellows running for his life. The following week, Fresno beat San Jose State 6-0 and then traveled to Loyola and won a decisive 27-6 victory over a team that had beaten the Dons.

Football was cancelled the following year due to World War II and Fellows returned to Fresno State in 1946, but the magic was gone. Fellows had some good performing games, yet the Bulldogs finished the season at 8-4. Fellows played a season with the New York Yankees in the old American Football League and a season for Ottawa in the Canadian League before quitting football. Fellows returned to Los Angeles, where he was an usher at various race tracks and the Coliseum.