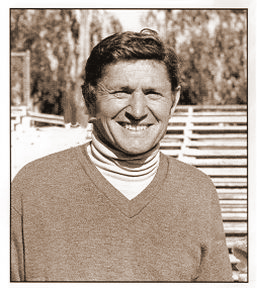 Bobby Fries spent two years in the Marines after graduation from Fresno State where he competed as a distance runner. He coached track and field for thirty-six years beginning in 1955 at Fowler High School where he started the school’s cross country team. In 1956, he took over the track and field and cross country teams at Fresno High School where he spent nine years. His cross country teams were undefeated for five years and won League and Valley championship titles. Fries' dual meet record was 35-5 and his 4 X 880-meter relay team missed the national record by less than a second on two occasions.

Bobby was hired by Fresno City College in 1965 and coached there for over twenty-six years. During his tenure at Fresno City, he won fourteen conference track and field championships, three Northern California titles, and was runner up in the state meet in 1970. His dual meet record was 159-36. He also helped to popularize women's running competitions, leading the women's cross country team to a second place finish in the 1978 State Meet and seven conference titles. The ladies had a 30-8 dual meet record.

As an instructor with the Olympic Development Team clinics, Fries gained respect from his fellow coaches by being able to teach them how to pole vault in just one hour. During the eight years he was associated with the clinics, he also taught sprints, triple jump, and distance running. Bobby was ranked number one instructor by his peers and the coaches he worked with. Fries had the ability to convey his enthusiasm for competing and winning to his athletes, inspiring them on to greater athletic achievement. He said one of his fondest memories was coaching 5'5'" sprinter, Jeremiah Wheeler. At Fresno City College, Fries worked hard to lengthen Wheeler's stride and taught him to "pop the track" and not just run over it. Within one year, Jeremiah took less strides in the 100-meter race than runners that were 6' tall. Wheeler made it the finals of the Olympic Trials, but lost a spot on the U.S. team by inches. Wheeler's best time was 10.17.

Coach Fries also mentored Olympic gold medal 4 x 400 relay winner Maxie Parks as well as NCAA and AAU champion hurdler Jery Wilson, who won two state JC titles and ran 13.4 in the high hurdles. Along with his tenure on the Olympic Development Team, Fries said another career highlight was being selected to coach the 1977 United States Indoor Track Team in Milan, Italy. Fries was inducted into the State Community College Track and Field Hall of Fame in 2000. His legacy in Fresno was founding and organizing the Father's Day Run which attracted thousands of participants for over forty consecutive years.

Fries learned to play golf when he was a caddy starting in 1940 at Sunnyside Country Club. In 1972, he decided to see how fast he could play eighteen holes. He carried just five clubs and ran between swings, shooting 81 and finishing in fifty-two minutes. Three months later, Jim O'Neal, with the help of three runners, claimed a world record of forty-seven minutes. Pat Ogle, who worked at Channel 24, urged Fries to try and break the world record. With the help of Hall, Nicholas, and Fertig who were his runners, they blazed around Fort Washington Golf Course in 38:12, shooting 81 and setting the world record.

Fries won three club championships at Fort Washington with his third title coming at the age of sixty-eight. He has qualified for the Senior Northern California Cup team seven times from 1999 to 2006. In 1994, he shot 72 at Sunnyside Country Club to qualify to play in the U.S. Senior Open championship in Pinehurst, North Carolina where he played a practice round with Gary Player. By 2008, Fries had made eight holes-in-one and in 2009, he made four that year to bring his total to twelve. Fries started scoring his age when he was sixty-seven and stopped counting at 150. He shoots his age almost every day and holds a handicap between two and four. In both track and golf, Fries combined his skills as a student of the sport with natural athletic talent and intuition.