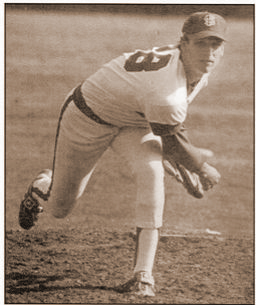 Mark Gardner, formerly of Clovis High and Fresno State, pitched for thirteen years in the major leagues and continued in the sport as the bullpen coach for the San Francisco Giants. Always a fan favorite, Gardner was also respected by his teammates, who voted him the winner of the Willie Mac Award named for Willie McCovey for his inspirational play and leadership.

Gardner got his start at Clovis High School where he excelled as an infielder with a rocket arm to first base. He pitched on occasion when needed for the Cougars. At Fresno City College, he didn't go out for baseball in his freshman year. "I don't think he thought he could play at our caliber at first, but he changed his mind, and we were sure glad he did, especially the way things turned out," said Len Bourdet, the Rams coach at the time. Gardner tried his hand at hurling under the tutelage of Bourdet and pitching coach Dick Selma, who had thrown in the major leagues for ten years with the New York Mets. Philadelphia Phillies, and others. His confidence and prowess grew, and in his sophomore year at Fresno City, Gardner blossomed into one of the best pitchers in the Valley Conference. He led the league in strikeouts while becoming the Rams pitching ace.

Fresno State University Coach Bob Bennett offered Gardner a scholarship. Bennett was famous for helping many a young player on the road to the professional baseball ranks, particularly pitchers. It was a great match for Gardner and the Fresno State Bulldogs. In 1984, Gardner helped lead the team to fifty-four victories and the Northern California Baseball Association Championship. Gardner was one of five All-NCBA players for the Dogs that year. In 1985, Gardner led the team to another championship, this time in the Pacific Coast Athletic Conference. He was the conference MVP and also received All-American honors. He won sixteen games his senior year while striking out 187 batters.

In the 1985 MLB draft, the Montreal Expos chose Gardner in the 8th round. It was the beginning of a long and successful career in professional baseball, with thirteen of those years spent as a pitcher in the big leagues: four with the Expos, one with the Kansas City Royals, two with the Florida Marlins, and six with the Giants. Gardner pitched in 345 major league games, 275 as a starter, while tossing a total of 1,764 innings. He won ninety-three games in his career and had a respectable ERA of 4.56. His best seasons in the bigs were with the Giants, going 12-9 in 1997, 13-6 in 1998, 12-7 in 1999 and 11-7 in 2000. Toward the end of his career, he was used as a long reliever. One of Gardner's biggest thrills on the hill was on July 6, 1991,when he was pitching for the Expos and came within a whisker of pitching a no-hitter against the Los Angeles Dodgers. He held them hitless at Dodger Stadium until the top of the 10th inning, when he gave up a hit.

Gardner retired from playing after the 2001 season. The following year, he went to work on the San Francisco coaching staff. As the bullpen coach, his pitchers have ranked among National League leaders in wins and saves. Gardner married his college sweetheart Lori Romeiro, a former FSU softball pitching great. Lori passed away in 2003 after a battle with cancer. She is also an inductee into the Fresno Athletic Hall of Fame, Class of 2006. Gardner remains active in community work for the Giants and in helping to promote the California OrganDonor Network. In 2005, Gardner's Fresno State #28 jersey was retired and hangs in the outfield at Pete Beiden Field where Gardner pitched on the day it opened.