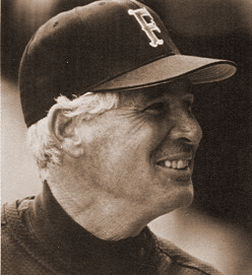 Augie Garrido was a record-setting slugger for the Fresno State baseball team who later pursued coaching and became the winningest dugout general in National Collegiate Athletic Association history, including five College World Series crowns. Garrido, coach of national powerhouse University of Texas since 1996, traces his success to former Fresno State skipper Pete Beiden, the legendary fundamentalist. "Fresno was the foundation of my baseball coaching career" Garrido said."Under Pete [Beiden] I realized the importance of a philosophy and why you do things."

When Vallejo-born Garrido put on his Fresno State Bulldog uniform for the first time in 1959, launching a three-year career with the 'Dogs, his dream was to become a major league outfielder. Coaching? He didn't think it was for him, or so he thought at the time. But he watched and took to heart some of Beiden's most successful, time-tested coaching tactics and strategies. Later, Garrido compiled a 1,629-755-8 record (.681) as a coach. In addition to the five national titles, he won twenty conference, eleven regional and four super-regional championships. He produced thirty-eight all-Americans and 64 professional players and was named conference Coach of the Year three times, Regional Coach six times and National Coach five times Garrido was inducted into halls of fame in Vallejo, Fresno, Fullerton, and Texas and is the subject of revealing 2008 television documentary produced for ESPN, Inning by Inning: A Portrait of a Coach. He's also writing a book analyzing how self-confidence can help overcome fear.

Garrido grew up in a working-class family. His father was a shipyard employee at a Mare Island and wanted his son to follow in his footsteps. But Garrido declined, pursuing college and a baseball scholarship. Garrido never forgot the emotional impact Beiden's words had on him as he led the Bulldogs to their first College World Series appearance in 1959. By the time he graduated in 1961, team captain Garrido had been named to All-Conference teams twice, hammered a school career .383 hitting average, and broke four single season records during 1961 by hitting 430 and slugging .711, including sixty-one hits and 101 total bases.

In 1966 following six seasons with various Cleveland Indian farm clubs, Garrido abandoned his career as a minor league player to take a coaching job at Sierra High School in Tollhouse. Garrido's first college coaching job was at San Francisco State (25-14) in 1969. He moved on to Cal Poly San Luis Obispo (86-62-1) from 1970 to 1972 which seasoned him for his next job at Cal State Fullerton. His association with Fullerton would extend over twenty-one years, interrupted by a three-year exodus to the University of Illinois (1988-1990). He was 111-57 in Champaign, including two Big 10 titles. He developed Fullerton into a national NCAA Division I power, winning three College World Series: 1979, 1984, and 1995. His 1995 team won 57 of 66 games, including a string of eighteen straight during a season-ending march to the CWS title. The Titans were 665-292-6 during Garrido's first stint as coach and 264-99 during his second.

Garrido took over at University of Texas in 1996, winning College World Series titles in 2002 and 2005, along with two Big 12 Conference crowns. Garrido is the only coach to guide teams from two different schools to CWS titles, and is also the only coach to claim national titles in four different decades. He was selected National Coach of the Year five times (1975, 1979, 1984, 1985, and 2002). After taking over the Longhorns, Garrido became pals with director and actor Kevin Costner, also an Austin resident. Costner cast Garrido as a major-Ieague manager in the movie, For Love of the Game. In real life,however, Garrido has rejected overtures to coach professional ball. "I just don't want to be there because I have a teacher's mentality," he said. "It's my job to help players find balance in their lives. I want to help them help themselves become what they want to be through the fundamentals of baseball."