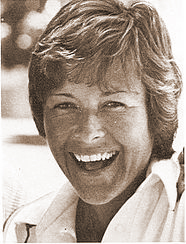 Shelley Hamlin was seventeen in 1966 when she played in her first U.S. Women's Open. The Roosevelt High School student was the low amateur and finished ninth. That's only a dim memory now for the thirty-year LPGA veteran who retired from the tour in 2002. Hamlin lives in Laveen, a suburb of Phoenix, Arizona. Hamlin has adopted the teaching technique of Golf Hall of Fame member Manuel de le Torre for over ten years and teaches golf classes for women on a couple of Phoenix public courses as well as bird classes. "I really love teaching golf and Dr le Torre’s method is so simple, it isn’t difficult to get results, : Hamlin said. :I play in a few legend tournaments we have each year; in fact, I won one. I still play a lot of golf, but mainly for fun."

There was no qualifying school in 1972 when the Stanford University grad joined the LPGA. Hamlin said that in those days, they just said, "Come on out and play." In 1973, the LPGA Rookie of the Year runner-up opened eyes by finishing in a tie for second in the U.S. Open. It proved to be her career best finish in a major event. For the next fourteen years, she shot some low scores, but could not put four rounds together. The next highlight was 1987 when she had four top ten finishes, topped by a second in the MasterCard International. In 1992 she had to go to the qualifying school for the first time. "Once I got through the school-and it was an experience-I rejoined the tour and it just seemed a lot more fun. I guess something like that will make you thankful to just be able to play again, but whatever it was, I relaxed a lot. I won a tournament, the Phar-Mor at Inverrary, and in 1993, I won the ShopRite LPGA Classic." Those two years were the first time Hamlin notched six-figure earnings.

Hamlin has been in the locker room to see friends over the last few years and has noticed a dramatic change. "The first thing was I heard about five languages and I’m not saying that is bad, just different," Hamlin said. "The Asian girls are dominating the tour and tend to be more reserved, so you don’t have the same atmosphere. When I joined, it was either American girls and a few Europeans or Australians and everyone spoke English. The girls were more animated and social. Girls now start playing at age five and are often pros by twenty or less. That's why I think our Legends Tour could take off. Who wouldn't want to watch Nancy Lopez or other icons of the game?" Another fond memory she has of when she first turned professional was the Colgate sponsorship of tournaments worldwide. "I remember when we played in the Philippines, I was introduced to President Marcos and got to take a ride on his yacht. Not too many golfers can say that," Hamlin said laughing. When she first joined the tour, Tom Seaver and Hamlin were hired by the California Kaisin Association to sell their product. "This was before he was Tom Terrific.' but he was just the nicest guy. His parents and my parents were good friends," Hamlin said. "After Seaver had won the World Series and was a big star, the families had Christmas dinner together and he still was the same old Tom.He's a special guy."

Hamlin was the first Fresno-born female to dominate golf at a young age. Benefitting from the teaching of early Fresno pro Grant Halstead, she won the junior girls' segment of the Northern California Women's Golf Association at thirteen. Two years later, she repeated that title and added the Central California Junior Girls', San Joaquin Valley, and the Fresno Bee-sponsored City Girls' championship. She played number one on the Roosevelt High boys' golf team. 1966 was a triumphant year for Hamlin with wins in the USGA Girls National Championship and the previously mentioned U.S. Open. That earned her a berth on the U.S. World Cup team and she was voted the best junior female golfer in the nation. Hamlin won four consecutive women's state championships, playing at Pebble Beach while at Stanford. She also captured the 1971 AIAW National Collegiate championship while a senior.

Hamlin also nabbed the San Francisco City title, represented the United States on the Curtis Cup team in Ireland, and was the low scorer on the World Cup team in Australia in 1968. The following year, she was runner- up to Catherine LaCoste for the U.S. Amateur. She served two terms as president of the LPGA in 1980 and 1981 and was instrumental in the LPGA'S move of headquarters to Sweetwater Country Club in Sugar Lane, Texas. Hamlin was once 90th on the LPGA money list with over a million dollars in earnings. Quite a career for a girl who was never a long hitter.