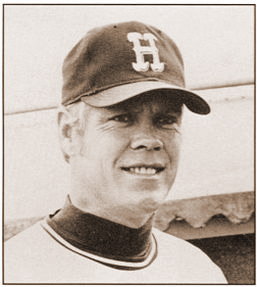 Jack Hannah was a two-sport athlete at Fresno State and pitched six seasons in the minor leagues, then went on to coach Hoover High School to two Valley Championships in baseball. The son of a ranch foreman, Hannah was also a modern-day cowboy who later formed the Sons of the San Joaquin singing group and was inducted into the National Songwriters Hall of Fame.

Born in Marshland, Missouri to Lon and Melba Hannah in 1933, Jack and brothers, Joe and Bob, loved the great outdoors. Hannah’s father was known as “Broad” Hannah because of his wide shoulders and work ethic. Broad Hannah was a ranch foreman and Jack’s early years were spent living the country life. He was too young at the time to realize the consequences of the Great Depression, but as with a lot of families of that era, the Hannahs headed to California, seeking a better life. Broad Hannah went out west to find work first. In the spring of 1937, the rest of the family drove to Elderville, in the Woodland area of the southern San Joaquin Valley. Family life was good for the Hannahs as they worked, played sports, trained horses, and sang together. Jack Hannah took up the guitar and family picnics were filled with music.

Work was hard on the ranch, but the family always made time for baseball. Jack and his brother, Joe, would often play catch with their dad, who had been a semi-pro ball player back in the Ozarks. The family followed the St. Louis Cardinals on the radio and the boys dreamed of playing for them. At Visalia High School, Hannah was a pitcher and outfielder and also excelled in football and basketball. Joe Hannah, a catcher, signed a pro contract with the Chicago Cubs right out of high school. Jack decided to play at Fresno State and hoped for a pro career as well. Hannah played for the Bulldogs under the legendary Pete Beiden. "He was the best. I loved him as a coach; he was the most knowledgeable baseball man I ever knew," Hannah said. "He was a great teacher and scholar of the game, and a wonderful friend as well."

Hannah also played football at Fresno State as a fullback on offense as a linebacker on defense. He damaged his shoulder in his sophomore season, an injury that would later hamper his athletic career. Hannah stayed with baseball for the 'Dogs for three seasons and won All-Regional recognition as a pitcher, going 7-1 with a 1.91 ERA. He played right field when he wasn't on the mound and hit .328, batting third or fourth in the lineup. In 1955, after his junior season at Fresno State, Hannah signed with the Milwaukee Braves as a pitcher. Even as a rookie, his close to 100 mph fastball generated excitement, once earning praise from New York Yankees skipper, Joe Gordon.

But his old football injury caused an arthritic condition that caught up with him before he reached the majors. Hannah spent five years in the Braves' system as a pitcher and outfielder and a year with the California Angels Triple-A team before doctors said his shoulder would never fully heal. “I was happy to be playing in the pros and grateful that I was able to play outfield, but my heart had been in pitching, : Hannah said. “They kept me around, hoping that the arm would recover, but it really didn’t.” During the off-season, Hannah had completed his schooling at Fresno State, ultimately earning his Master's degree in guidance counseling. He began a career spanning twenty-eight years at Hoover High School as a teacher, coach, and counselor. The Patriots won two Valley championships under Hannah, and in 1980, he was named the California High School Coach of the Year. He was also selected the National Coach of the Year for the Southwest Region and inducted into the National High School Hall of Fame. His overall coaching record at Hoover was 314-148.

After a career in sports, education, coaching, and cowboy wrangling, Hannah pursued another life-long passion: music. Along with his brother, Joe, and Joe's son, Lonnie, Jack formed the Sons of the San Joaquin, one of the most successful cowboy singing groups across the globe The Sons have sold many albums and performed around the world. Hannah offered this advice to young athletes: "Finish your education. It is so important. Even if you feel that academics are not your thing, it could be a trade or whatever. It's most important because you might not go as far as you would like in athletics for one reason or another."