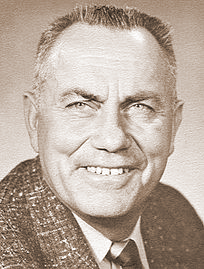 Leo A. Harris enjoyed success in any athletic endeavor that he tried, highlighted by a twenty- year tenure as athletic director at the University of Oregon, Eugene. The Santa Cruz-born and raised Harris starred in football, basketball, baseball, and swimming at Santa Cruz High School. He was recruited by Stanford and played two seasons for Glenn Scobey "Pop" Warner.

Harris was the starting left tackle for unbeaten Stanford, who outplayed yet were tied 7-7 with the University of Alabama in the 1927 Rose Bowl. Harris came to Fresno after his graduation from Stanford and was hired to coach the Fresno High School football, basketball, and baseball teams. Longtime Fresno Bee sports editor Ed Orman described his first meeting with Harris. "The black-thatched, trim athlete was bubbling with enthusiasm, aggressiveness, enterprise or whatever over his first job. He was made head coach of football, basketball, and baseball. Football was his specialty and he not only turned out winning teams on the gridiron, but also in basketball. Baseball was not his dish and he admits it to this day." His Warrior football teams won 39-94 and captured one valley championship while his basketball teams took two.

Harris left Fresno High in 1932 and became the freshmen football coach at Fresno State. In 1935, he replaced Stan Borleske as head coach of the Bulldogs. In three seasons, Fresno was 18-5-1, won one Far Western Conference championship outright and tied for another. Harris gave up the Fresno State job in 1936 to go into school administration. He was vice principal at Fresno Tech, principal at Fresno High and superintendent of the Carmel schools. Harris returned to the athletic scene in 1947 as director of athletics at the University of Oregon, Eugene. His tenure brought golden years for Ducks' athletic teams.

When Harris stepped down as AD, Oregon Journal sports editor George Pasero summed up the Harris reign in his column. "Twenty years ago, Leo took over an operation that was laboring and uncertain of the future. Leo began putting it in the black and never failed to make a financial profit as high as $200,000.. Under his stewardship, the Ducks began to excel in almost all sports and the victories were accomplished always within the rules. Leo never condoned anything by his coaches except what the rules allowed...Leo wasn't always popular, either. To overzealous alumni, he responded with a blunt 'no'...and he withstood their pressures..Harris ran his operation and to heck with winning popularity contests...Leo never flinches either when it became necessary for his school as a Pacific Coast Conference orphan to go it alone. Like Leo or not, people began saying "the guy's a great businessman'...Funny thing, though, a lot of people began to like the guy."

If you ever met Harris, he was a real gentleman, easy to talk to, and very confident. He loved life and one of his favorite pastimes was fishing. He hired good people such as football coach, Len Casanova, and track coach, Bill Bowerman. Casanova succeeded him as athletic director. Harris' Oregon legacy includes the new two million dollar Autzen Stadium, in part paid by a one million dollar surplus from the Oregon athletic budget. That money purchased a ninety-acre tract across the Willamette River from the campus. The stadium was christened in 1967 with a seating capacity of 41,000. Harris also directed renovation of McArthur Court and Howe Baseball Field.