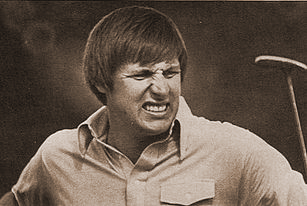 When Jerry Heard was a junior golfer, he-in Johnny Miller's own words-”beat me like a drum." They earned their PGA Tour playing card the same year. Heard was a Top 10 player who already had won four tournaments from 1969 to 1974 and by the age of twenty-eight appeared to have a promising career. He was solidly in contention for the U.S. Open at Oakmont in 1973. "I thought I was leading going into the back nine, then I looked at the scoreboard and Johnny [Miller] shot a 63 final round and I didn't care to play for second," Heard said in a telephone conversation last year. "I think I finished sixth or so.” Heard was speaking from the Silverthorn semi-private Country Club that he owns and operates in Spring Hill, Florida. He plays golf a couple of times a week and fishes a lot, something he has done most of his life.

Heard was regarded as one of the up-and-coming stars from a stellar group of "Young Lions," as they were called. Heard said he and Miller earned their PGA playing cards in 1969 and Lanny Watkins did so two years later. The three played a lot of golf together. Miller, still a close friend, said of Heard: “When we started in the PGA, Jerry was a fantastic putter and had the best tempo on the Tour. I've always said if he hadn't been hit by lightning, he would have won a lot more tournaments.” The incident that Miller was referring to was the fateful day in the second round of the 1975 Chicago Open, where Heard, Lee Trevino, and Bobby Nichols were waiting out a storm near the 13th green at the Butler National Golf Club and a lightning bolt arced across the water. Heard and Trevino were sharing an umbrella and they were knocked into the air by the force of the bolt. The lightning knifed through Trevino's bag and up his arm before exiting through his back. Heard was resting the umbrella on his groin and it hit there: he recalls he could not open his hand. It also passed through his back.

All three golfers were taken to a hospital and kept for two nights. Because the tournament was delayed for two days because of rain, Heard checked out of the hospital and was able to play the final two rounds and finished fourth. "I didn't think it was too bad because I didn't have pain, but it wasn't many days [before] my back really bothered me," Heard said. "The thing I regret is that I didn't have back surgery right away. Trevino did and he was able to play years of great golf. I guess I thought I could work it out and I waited way too long before I had surgery. I won one tournament after that, but while my back was sore. It altered my swing and I never fully recovered." In 1971, 1972, and 1974, he finished seventh, fifth, and eighth on the money list with over $100,000 in earnings each year. He also made a rare trip overseas in 1974 and won the Spanish Open. "I've always kinda wondered what I could have done if the lightning hadn't happened," Heard said. "I was in the Top 20 all the time. At one time, I was the one to beat, but I have no regrets. I consider myself lucky; it could have been a lot worse. The equipment is different now and they hit the ball a little longer, but the money is unbelievable. I think I could've made it today."

One thing that Heard says has not changed is his putting. His short putts are great and he reads the greens well on the long ones. Heard retired from Tour play by the early 1980s and took a club pro job at the South Seas Plantation on Captiva Island for nineteen years. Born in Visalia in 1947, he was an all-around athlete in football, baseball and tennis. He took up golf at the age of eleven after his father, Bill, a very good fast-pitch softball player, was learning the game. Being a natural athlete, Heard found golf to be a real challenge. "I was pretty bad at first, but then I started spending a lot of time at the Sierra View course in Visalia and getting lessons from Ralph Lomelli, Sr. By the time I was twelve, I was pretty good.” Heard hurt a knee in football at Visalia High, but it only bothered him occasionally. He was a second team All-American at Fresno State and won a number of tournaments.