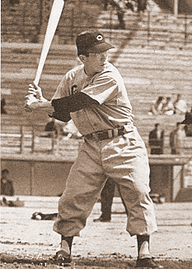 Standing 5'4" and weighing 145 pounds, Satoshi "Fibber" Hirayama was small even by baseball standards. Surprisingly, Hirayama went to Fresno State College on a football scholarship. "I was recruited for football, but I didn't like spring practice, so went out for baseball in the spring and played four years for Pete Beiden," Hirayama said. "I also played four years of football, my first on the freshman team and the last three varsity." The quickness that allowed Hirayama to set a school record for stolen bases carried over to the football field where he was a very elusive runner and a hard-hitting tackler on defense. Hirayama never suffered a major injury and enjoyed the physical contact.

Hirayama's family was living in Exeter, but came to Fresno's St. Agnes Hospital for the birth of their son. His father was born and raised in Hiroshima, Japan. He brought his wife to Exeter in the 1930s. Hirayama's athletic success was rewarded when he received a Fresno State scholarship for fifty dollars a month and worked in the towel room for athletic custodian Windy Holmes. Hirayama was recruited by Fresno State after two stellar years as a football and baseball star at Exeter High School under coach Bill Terry. "In those days, Terry coached all the major sports," Hirayama said. "We had some strong football teams. Baseball came easy for me because that's all I did for nearly three years in theJapanese detention center in Poston, Arizona." Hirayama was only twelve years old when the American fleet at Pearl Harbor was attacked by Japan, plunging the United States into World War II. The Hirayama family was part of the 25,000 Japanese-Americans (Nisei) on the West Coast ordered to sell their homes and businesses. They eventually were shipped to one of ten detention centers in California, Arizona, Colorado, Utah, South Dakota, Wyoming, Arkansas, and Idaho surrounded by barbed wire and guarded by soldiers. Following his three years in the Arizona relocation center, he played two seasons of football and baseball at Exeter High.

Today, Hirayama helps to run the Hiroshima Carp Baseball Academy in the Dominican Republic. His twenty-year association with that Japanese major league team includes eleven years of playing and managing as well as scouting and teaching. Fibber would have had a longer professional playing career had he not run into a wall while chasing a fly ball and sustained the loss of a nerve in his right eye, an injury which basically deprived him of his sight in that eye. "I can see images,but can't tell any details of what I am looking at," Hirayama said. "I think that was during my seventh year of play in Hiroshima. I was playing and coaching at the time. After that, I just coached for three years, then managed a farm club for a year before I came back to the States." Hirayama later stated, "Baseball was popular, but with Hiroshima, a team owned by the city, it was still pretty basic. No lights, people sat on grass. No bathrooms, people did their thing against the fence. From our dugout, we had to go outside for a bathroom. There was a big barrel at the entrance and people tossed money in to keep the ball club going." In Hirayama's second season, the Carp moved into a new stadium that had lights, bathrooms, and seated about 20,000 fans.

"It was like I had died and gone to heaven," Hirayama recalled. "We drew big crowds as did most of the other major league teams. Baseball continued to grow in Japan. At that time, there were very few foreign players. Most of those were from Hawaii." Since neither he nor his wife, Jean, spoke Japanese when he signed with the Carp, there was a period of learning the language and customs. Wally Yonamine and Andy Miyamoto were two Hawaiian players who had a lasting impact. Yonamine played aggressive American-style baseball, similar to what Hirayama brought to the Carp.