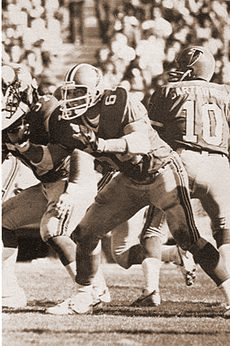 When Pat Howell was growing up in Fresno, he was a multi-sport player, but football was his favorite. Taller than most, Pat was unique in the fact that he liked to play on the line and block. In Pop Warner football, Pat's coach, Russ Pulliam, influenced the young Howell to always play hard. "He was one of the toughest coaches I ever played for, but I respected him and loved him. He certainly put me in the right direction and his influence helped me right through my football career and even to who I am today." Pat's father, Harry, taught Pat that hard work and discipline were important traits in achieving success in life. "My dad was strict, but fair with us kids and he motivated me in many ways. He had a 'Do it right or do it over,' kind of rule about things, but he provided lots of encouragement for us," remembers Pat.

Howell enjoyed playing football at Fresno High under Vance Stanley, who coached with passion and intensity. "He instructed us well and motivated us to keep improving and even to think about the next level," says Pat. Another thing that helped Pat prepare for his future was weightlifting. Weight programs were not so much in style in the 1970s, but while in high school, the 235 pound right tackle was lifting 400 pounds regularly. "My dad was a weightlifter and I was inspired by him and my brother, Craig, who went on to play football at the University of Colorado," says Pat, "And also my brother-law, Mike Long, who got a ride as a linebacker at UOP" By the time he was a senior, Pat was hearing from many colleges, but Pat chose to play at USC where he was recruited by legendary line coach Marv Goux. "Coach Goux was one of the best recruiters anywhere, as he had great passion and a toughness about him,that just made you want to play for him," Pat said recently, "And he just owned the Valley. So many players from here played at USC and a lot of that was because of Marv Goux."

A wise choice indeed as Pat Howell had a great career at USC. He was a two-time All-American and finished a runner-up for the Lombardi Award in 1978. From 1975 to 1978, the Trojans had a record of 37-10, winning two PAC 10 championships, four bowl games, twice beating Michigan in the Rose Bowl (1976, 1978), and winning the National Championship in 1978. Recently, the Los Angeles Times reported that the 1978 USC football team could still be the best Trojan team of all time. Pat was also named to the Bob Hope All-American Team. The Atlanta Falcons grabbed Howell in the second round of the 1979 NFL Draft. He played for Atlanta for four years and the Falcons made the post-season twice. In 1983, Pat was traded to the Houston Oilers and finished his eight-year NFLcareer. He played in sixty-seven games despite being plagued by ankle, shoulder, and elbow surgeries.

Pat Howell retired in 1985 and returned home with wife, Michelle, to Fresno. Their daughter, Lauren went to Bullard High where she was an outstanding volleyball player and played at Pepperdine University. She is a teacher and coach with the Fresno Unified School District. Their son, Nick, also an outstanding athlete at Bullard High, competed in football for USC. Pat is a team leader for RBC Wealth Management Company. He has been in the brokerage/investment business for more than two decades. He continued to work out with weights and volunteer as a football coach for the Bullard High School Knights.