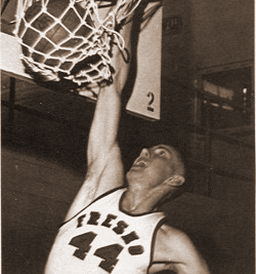 Harry Miller said Lonnie Hughey was as good a basketball player as he had ever coached and one of the most enjoyable to be around. That was high praise from a former Fresno State coach who only had the 6'7" Hughey for one year and coached mostly winning collegiate basketball teams for thirty years. Hughey enrolled at Fresno State in 1965, and despite playing just two seasons, is among the best in per-game rebounds (15.1), career rebounds, and career scoring. He had seven thirty-point games with a tally of thirty-seven against Los Angeles State. He played one year for Miller and one year for Ed Gregory.

Hughey was the centerpiece of two of Coach Merritt Gilbert's Sierra High School champion teams, then spent two years with Joe Kelly at Fresno City College, winning a state title. Hughey held the Fresno City scoring record of 1,525 points from 1964 to 2003. He then played 85 games on the European tour and one year on a Belgium professional team, never missing a game. Late College of Sequoias coach Polly Wilhelmsen was upset with Hughey because he found him a job in Visalia for the summer and then he ended up at Fresno City College. "I was headed for Utah State until Harry Miller and Joe Kelly came to our home in Auberry. My dad liked both coaches and I did, too, and they told me they would get me a job with Pepsi through Bud Richter, so I went to Fresno City for two years and then to Fresno State. Looking back, I'm glad I didn't go to Utah State."

Hughey was blessed with a strong body. He was born in Fowler, but reared in the foothills of Auberry. Climbing the mountains surrounding Auberry helped him develop strong legs. "It is funny I never got hurt badly enough to miss a game on the basketball floor, but almost got killed by Vallejo fans at the end of the game where we won a semi-final state tournament game,"Hughey said. "We upset Tark's (Jerry Tarkanian's) unbeaten Riverside team in the opener and I scored twenty-four points and had twenty-two rebounds against Bob Rule, a really good center. Then, we played Vallejo and there was a big brawl at the end of the game. I got punched several times and some fans were coming after me with chairs when our assistant coach, John Toomasian, grabbed me and was able to get me out of there. He probably saved my life. I had a black eye and some bumps on my face."

Hughey recovered in time for the state title game, in which Fresno City College beat San Diego City College. In his sophomore season, the Rams lost to Allan Hancock College in the semi-finals and finished third. Teammates, Maurice Talbot and Miller said, "Lonnie had great tipping ability and a special way to grab rebounds with one hand and to shoot one-handed, [to] keep the ball alive and when he couldn’t grab it, he would tip it to a teammate, " Talbot said. "Most of his points came inside, but he had a good hook shot." Hughey, who was 6’7" and a slender 195 pounds at Fresno State said it was great having Talbot (6'5", 235 Ibs.) and Loren Thomsen (6'5", 245 lbs.) on either side. "They helped open up the middle for me,"Hughey explained. "As for rebounding,I used to tip the ball a lot in practice and watch how the ball came off the rim. I wasn't fast, but I was quick and that allowed me to take rebounds from bigger people."

Miller said he never had a player who was so easy to coach and pleasant to deal with. " He was an exceptional player and an exceptional person," Miller said. "He practiced as hard as he played. I can’t say he was my best player because I had a lot of good ones, but he was equal to any." In 1965, Fresno State captured the CCAA by winning thirteen of their final sixteen games. Seattle Pacific hosted the first round of the college division playoffs. Talbot was unable to play because the CCAA allowed players only two years in JC and three in college, but the NCAA did not.

Hughey was mugged by three players with no call. He threw an elbow to escape and the official ejected him along with Miller. After getting a technical for loudly protesting the call, Miller threw his coat on the floor and said, "you’ve got everything else; you might as well have my coat, too." The next year, under Coach Ed Gregory, Fresno State again won the CCAA, but Hughey said his most vivid memory of that year was a two-game series with University of Texas at El Paso (UTEP). "It was the season that coach Don Haskins' team won the NCAA championship and we were playing two games in their gym," Hughey said. "The first night, we lost by two points and had a chance to win. The second night they beat us by fifteen. Gregory said when he met Haskins later that year, he said Fresno played them tougher than Kentucky did."

Fresno beat Nevada and Seattle Pacific to earn a trip to the college division championships in Evansville, Indiana, where they lost to Southern Illinois headed by guard Walt Frazier. Hughey was drafted by the San Francisco Warriors in the sixth round, was cut, and then signed on for an eighty-five game trip to Europe with an all-star team that traveled from Luxemburg to France. He played one year for Belgium and then came home to raise a family. Quite a career for a player who was 5'11" in his freshman season, grew five inches the next year, and ended up 6'7".