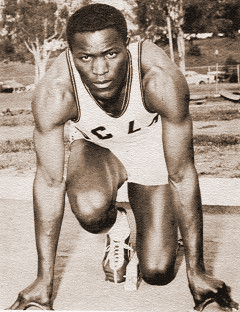 Fresno County native, Rafer Johnson won gold and silver medals in the Olympic Games decathlon, but his legacy will include being one of the founders and ongoing leaders of the Special Olympics. Johnson, a very giving person, was on the original board that created the Special Olympics in 1969, giving children who have physical or mental disabilities an opportunity to compete. He became chairman of the board and was still very involved well into his seventies. "The opportunities are out there every day for special athletes," Johnson said. "As we know, early on those opportunities were not there. The headquarters used to be in Los Angeles, but the California program is so large, it has been divided into Northern and Southern California sections. When we started, the median age of participants was eight or nine years old. Now, it is twenty-five or twenty-six, meaning the participants are staying with the program. The Break the Barriers group in Fresno is a model for all states. It's an unbelievable program."

Johnson was born in Texas, but by age nine, the family had settled in Kingsburg. During the summer of 1948 when he was twelve, Johnson almost had his athletic career end before it began due to a peach cannery conveyor belt accident that nearly cost him his left foot. "Three of us kids would grab a tree branch and drop it onto the conveyor belt, ride for a short time, then grab another branch and swing off or go a few feet more and jump off onto a wooden platform," Rafer said during a telephone conversation in 2008. "I missed the first branch, then the belt went around a curve with a nine-foot drop to cement which would have hurt, but before I could jump, my foot got caught in the belt. It was excruciating and I screamed, So someone ran and hit the lever to stop the conveyor belt. The boss came out and turned it back on. Luckily, it was turned off again before my foot was sliced off."Jonnson said Dr. Norberg in Kingsburg did an amazing job of putting the foot back together. Rafer was in the hospital more than four weeks with his foot raised to keep the blood flowing.

He was on crutches for nearly eight weeks, but was able to play junior high baseball in 1949. "It was a pretty traumatic experience and I still can't walk barefoot on any surface other than the beach or a rug without a lot of pain," Johnson said. "You most often see me with shoes on. Even in 1984 when I climbed the long stairway in the Los Angeles Coliseum to light the torch for the Games, it was aching, but the excitement of the moment, the lights flashing caused me to forget about it." Johnson went on to become an outstanding three-sport athlete in football, baseball, and track at Kingsburg High School, earning eleven letters. He was also equally impressive as a basketball and track performer at UCLA.

While serving as student body president at UCLA as a senior, Johnson re-injured his left knee and was barely able to compete in the 1956 Melbourne, Australia Olympiad. In the grueling decathlon, his left foot launched the take-off in the long Jump and he landed on it in the hurdles. It hurt enough that he scratched from the open long jump where he also qualified. Powerful teammate Milt Campbell set a first day decathlon world record of 4,564 points, but Johnson was close until the initial event on the second day, the high hurdles. Campbell won in 14.0 to Johnson's sub-par 15.1. With hopes of gold gone, Johnson had to fight off Russian Vasily Kuznetsov for the silver which he won by 122 points.

The knee ended Johnson's hope of playing football at UCLA in 1957, but he was a member of Coach John Wooden's basketball team. An operation and therapy healed the knee. Johnson went to Rome and edged UCLA teammate and friend, C.K. Yang, for a decathlon gold medal with a world record performance of 8,592 points in 1960. In addition to his victory, he was captain of the American team and proudly carried the flag in the opening ceremonies. This was his last decathlon.Johnson said he was torn between going to California with veteran coach Brutas Hamilton or UCLA with venerable Ducky Drake. "The coaches were like two peas in a pod, both super-gentleman and great coaches, but the weather was one factor. I was used to warmer weather. Bob Seaman was already at UCLA and he was a good friend of mine and is to this day and he urged me to come. I saw a picture of the African-American student president at UCLA and that impressed me. There were a number of factors, but I chose UCLA and I never regretted it." In addition to the Olympic medals, he won the AAU decathlons in 1956, 1958, and 1960, and the Pan American Games title in 1955. He was the Sports Illustrated Athlete of the Year in 1958 for his athletic exploits at UCLA. During his school years, he was a member of the Fellowship of Christian Athletes and Campus Crusade for Christ. After 1960, he appeared in several films for 20th Century Fox, represented the Hershey Company, and befriended the lateRobert Kennedy in 1968. Johnson and former football star Rosey Grier wrestled assassin, Sirhan Sirhan, to the floor and took his gun away after he had shot Kennedy. In 1971, Johnson married Betsy Thorsen, with whom he had a son, Jason., and a daughter.Jenny. Jason, a javelin thrower, became the UCLA team captain. In the Athens Olympic Trials, he barely missed making the team when he suffered a career-ending torn ligament. One of Rafer's most memorable moments was traveling to the 2000 Games in Sydney, Australia and cheering on Jenny, who was the captain of the UCLA volleyball team, and her partner in Olympic beach volleyball. They finished fourth. Johnson still works out four times a week. Rafer Johnson Junior High School in Kingsburg is named in his honor. It is incredible that two small Central California towns could produce two world-renowned decathlon stars like Rafer Johnson and Bob Mathias.