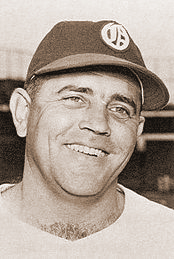 Earl Jones was a standout football and baseball player at Roosevelt High School from 1935 through 1937. It was his eye-blinking fastball and wicked curve that convinced scouts to hire him for professional baseball in 1938. He made the Arizona-Texas League All-Star team in his rookie year. He graduated to the Penn State League the following season and posted a 15-9 record, landing on his second straight All-Star team. In 1940, Jones was 12-4 in the Three-Eye League, making the All-Star team again and notching his first no-hit, no-run game. He struck out a league record twenty batters in 1941 and led the Canadian American League in strikeouts with 220 in 184 innings in 1942. With his star rising fast and a 17-11 record, he was promoted to the AAA American Association in 1943. He went to camp with the same team in 1945, but was called up by the parent team, St. Louis Browns. He pitched relief in ten games and in twenty-eight innings had a 0-0 record with a 2.54 earned run average. Jones struck out thirteen and walked eighteen. He returned to Fresno to become a fireman and, on weekends, he pitched for the strong Roma Wines team. Following the end of the war, he spent four seasons in the American Association and Pacific Coast League.