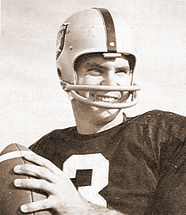 It is difficult to imagine a more idyllic career in sports by any definition-exhilaration of competition, expansion of cultural horizons, accumulation of wealth and national recognition-than that which Daryle Lamonica was privileged to experience. He has a remarkable sports resume: four-sport Clovis High School letterman, All-American, Third Team quarterback for Notre Damë, 1968 Super Bowl II quarterback for the Oakland Raiders, two-time AFL-AFC Player of the Year, and four-time Pro Bowl selection. Lamonica was christened the "Mad Bomber" by television commentator Howard Cosell. That was something Lamonica admitted he didn't like at first, but the seemingly appropriate nickname stuck with the 6'3", 215-pound, right-handed Raiders passer with the explosive arm.

Lamonica could launch a football forty yards with effortless accuracy. For the record, catch-and-run distances for some of Lamonica's longest touchdown completions measured between sixty and ninety-three yards. Was he a "Mad Bomber? Yes. And the "Black Hole Gang" of wild-eyed, beer-guzzling, weirdly-costumed Raider fans loved him for it and roared their approval all the way to the Super Bowl. It didn't take Lamonica long to adjust to being called the "Mad Bomber." He said, "I was able to utilize it [the long pass] as a weapon and as a tool, and it worked out well for me..I used to rely on my vertical game for the long passes and, of course, we also had our short-to-medium range passes as well. But, I mostly relied on my receivers with speed for big yardage with quick strikes." Lamonica would complete 1,138 of 2,248 passes (50.6 percent) for 16,655 yards and 148 touchdowns during eight seasons with the Raiders.

During four seasons with the Buffalo Bills, he had completed only 150 of 353 passes (42.5 percent) including sixteen touchdowns. His two-team career totals were 1,288 completions in 2,601 attempts (49.5 percent) for 164 TDs during 151 games spread over twelve years. Dating back to his boyhood on his family's grape and peach farm, Lamonica's earliest athletic success was as a member of a Clovis team that participated in the Little League World Series. He was good enough in high school to have been offered a pro contract by the Chicago Cubs before he accepted a scholarship to Notre Dame. During his three seasons at Notre Dame, the Fighting Irish were only 12-18 in the win-loss columns. He woefully completed only three of thirty-one passes for 242 yards as a sophomore; kept laboring for twenty of fifty-two for 300 yards and two touchdowns as a junior; and when he became a starter as a senior, he completed sixty-four of l128 passes for 821 yards and six TDs. Best of all he completed his collegiate career by passing the East in a 25-19 win in the 1962 East-West Shrine Game, and was selected as the outstanding offensive player.

Lamonica was signed by the Buffalo Bills in 1963, but spent four seasons as starter Jack Kemp's backup before he was traded to the Raiders to be "born again" in 1967. His first season with the Raiders made a huge impact on excitable coach John Madden and Oakland's blue collar fans as he led them to a 40-7 win over Houston in the AFL championship game; however, the Raiders lost their Super Bowl II game against the Green Bay Packers, 33-14. During the regular season, Lamonica completed 220 of 425 passes for 3,228 yards and thirty touchdowns. He was named AFL Player of the Year in 1967, an honor that he would win again in 1969, although the Raiders lost the AFL championship that year to the Kansas City Chiefs, 17-7. Lamonica completed 221 of 426 passes for 3,302 yards and thirty-four touchdowns in 1969.

There were many thrills during Lamonica s fourteen-year pro career and he says that his most exciting game was the unforgettable 1968 "Heidi Bow" in Oakland when he and "Broadway Joe" Namath of the New York Jets dueled on national television. To the utter amazement of millions of outraged fans, the Jets were ahead of the Raiders, 32-29, when NBC cut away from the game to its previously scheduled program the movie Heidi-with fifty seconds left on the scoreboard clock. Miraculously, Oakland would score twice within nine seconds, first on a Lamonica pass and then on a kickoff recovery in the end zone for a 43-32 win. But millions of TV viewers never saw the ending to what is still considered one of the most exciting football games ever played. "We scored fourteen points in a matter of nine seconds," Lamonica recalled. "I was able to hit Charlie Smith with a long TD pass and then we recovered the ball in the end zone on the kickoff. But that one pass that I threw changed the game for the networks today: they cannot stop an NFL game until it is over. You can say that we were able to make sports history."Since his retirement, Lamonica has often been asked to name his favorite teammates and he always begins with Jim Otto. "He was one of the greatest centers who ever played the game," he said of "Double O." He also said that he always admired the blocking of linemen Art Shell and Gene Upshaw, the pass catching and blocking of tight end Raymond Chester, and the tackling of defensive back Willie Brown. In addition to many great moments experienced throughout his career, Lamonica was paid to do two of the things he loves best-fishing and hunting-as a host of Outdoors with the Pros for Fox Sports Net. Elected to the Fresno Athletic Hall of Fame, Daryle has had a Clovis stadium named after him and has even been named to the National Italian American Sports Hall of Fame along with such luminaries as Joe DiMaggio, Rocky Marciano, Willie Pep, Yogi Berra, and Rocky Graziano.