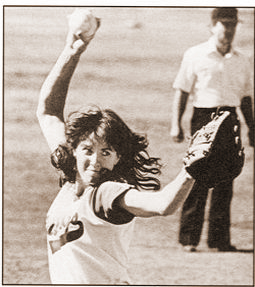 Wende Ward Lourenco was one of the greatest pitchers to play for Fresno State and helped put the Bulldogs on the map when they played on a dinky field with no fences and few bleachers. The Tulare Western High School athlete helped pitch Fresno State University into the 1982 College Softball World Series. The Bulldogs lost the series opener, but went on to reach the finals, losing 2-0 to UCLA.

Before she graduated after the 1983 season, Lourenco rewrote the Bulldog record book in pitching. She was also a dangerous hitter with home run pop and played third base when not in the circle. "I grew up loving sports, all sports, but softball was my favorite at least until I took up the game of golf," Lourmenco explained. "I started playing softball when I was ten with the Bobby Soxers.

At Tulare Western, I played whatever was in season. One summer, I played in three softball leagues plus a basketball league. That was almost too much." Lourenco's Fresno State coach, Donna Pickel, said Lourenco was the best athlete she ever coached and probably the most enthusiastic. "She was a delight," Pickel said, "Always followed directions and was a real leader. We played on several fields that didn't have fences, so gappers were often home runs. She was our first All-American." Lourenco recalled Pickel's organizational and recruiting skills and also had high praise for pitching coach Ralph Salazar, who she said taught her so much about technique and attitude. "Ralph showed me the windup, stance on the mound, game plan, intimidation, [and] how to strike out batters. To me, he was the best pitching coach in the world.

The straight back, windmill pitching motion was easy on my arm,"Lourenco said. In her four years at Fresno State, Lourenco won 77 games, pitched 877 ⅓ innings, had 691 strikeouts, thirteen home runs, 85 runs batted in, and a 0.61earned run average. She threw six no-hitters and two perfect games. Against Santa Barbara in 1982, she went twenty-one innings and also struck out seventeen in a five-inning game. Her cumulative batting average was .268 and that was before the juiced softball. Fresno State retired her #19 uniform in 1987. "I think I just loved to play softball; it was so much fun and we had some very good teams,"Lourenco said. Lourenco played in the 1983 Pan-American Games and was on the winning American team.