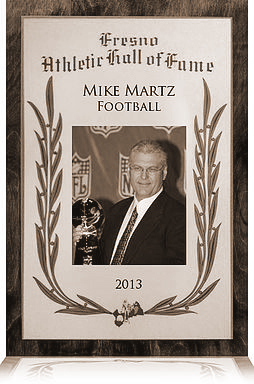 A former Fresno State tight end and assistant coach, Martz left his stamp on the National Football League as the offensive guru behind the St. Louis Rams' "Greatest Show on Turf" during the franchise's glory years in the late 1990s and early 2000s.

With Martz devising imaginative plays for quarterback Kurt Warner and tailback Marshall Faulk, the Rams won their first Super Bowl championship, 23-16 over the Tennessee Titans, during the 1999 season under Coach Dick Vermeil.

When Vermeil retired, Martz took over the Rams. It was a remarkable ascension for someone who started his coaching career as an assistant at Fresno's Bullard High School and got his first shot with the Rams by telling Coach Chuck Knox he would coach the tight ends for free.

The Rams' winning ways continued under Martz, as the team's high-scoring, quick-striking offense gave opposing defenses fits. The Rams won two NFC West titles, the 2001 NFC Championship and compiled a 53-32 regular-season record during Martz's five-plus seasons. They went 3-4 in the playoffs, highlighted by advancing to Super Bowl XXXVI, where they fell to the New England Patriots. During the 1999 campaign, Martz's No. 1 ranked offense scored 526 points, fourth highest in NFL history. Said Vermeil of Martz, who had returned to the Rams after two years as the Washington Redskins' quarterbacks coach: "I can't think, in my history of coaching, of any assistant who came into an NFL franchise and made the immediate impact that Mike Martz did."

Following his dismissal as Rams coach in 2005, Martz was offensive coordinator for the Detroit Lions (2006-07), San Francisco 49ers (2008) and Chicago Bears (2010-11). In January 2012, Martz, 60 years old at the time, announced his retirement from the NFL. Several months later, he became an NFL game analyst for Fox Sports. Once asked his coaching philosophy, Martz answered, "You just can't play the game tight. You've got to let it all hang out, and not worry about it."