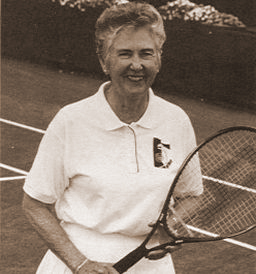 Winning more than eighty United States Tennis Association National Senior titles all after the age of sixty-four, Ruth Elaine Mason is a legend in her sport. She also traveled to colleges on both coasts, conducting instructional clinics for tennis teachers and coaches, and developed the concept of teaching children to play using a shorter racket. The Elaine Mason Tennis Book is still used as a college tennis text.

Mason, a former tennis coach at Fresno State, dominated senior singles and doubles events year after year in the late 1990s and into the next century, even returning to the National Seniors tour after knee replacement surgery in 2007. She was born in Selma and attended Washington Union High School in Easton. She graduated from Fresno State College and earned a Master's degree from Stanford University. Mason excelled at volleyball and tennis as a student, but gave up competitive sports for much of her adult life to focus on teaching, coaching, and sports instruction writing. She taught physical education at various high schools and at Fresno State from 1956-1979. She coached tennis at Fresno State from 1971-1978 and, for ten years, was a staff tennis instructor for teachers and coaches from around the world for the United State Teachers Workshop in Forest Hills, New York. She also traveled the country, conducting clinics for the President's Council on Physical Fitness and served on numerous state and national physical education committees.

At age sixty-four, Mason entered her first national tennis tournament and went on to win numerous United States Tennis Association Gold Tennis Ball awards for national titles, along with senior's titles in Europe, Africa and Australia. She said she had no regrets about not competing earlier in life. "I was so into teaching and coaching, I just wanted to be the best teacher I could be, especially with the children," Mason said. Her love for teaching tennis to children led her to develop the idea of using a shorter racket. She had a patent on the "short racket" concept for twenty-two years before big sporting goods companies began producing the rackets. She said it was difficult to compete with large corporations and declined to pursue the fight. Mason said she takes considerable pride from knowing that she guided countless young people to take up the game of tennis. Her place in tennis history is forever secured through her domination of the National Seniors tour for more than twenty years.