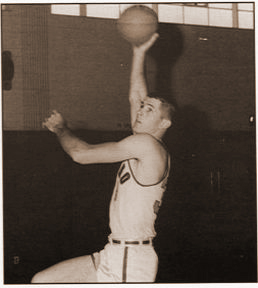 Mike McFerson shot from behind the arc before there was an arc. In his junior and senior years at Fresno State, a majority of his two-point shots would have been three-pointers today. Bulldog teammate and point guard, George Sarantos, recalled that McFerson's shot was the quickest he's ever seen. McFerson, 6'3" with long arms, could receive a pass and go straight up, arms fully extended, and release the ball. "In the three years we played, I can't remember anyone blocking that shot on him,"Sarantos said. "Today, with the three-point rule, he would have had a ton more points."McFerson was born and raised in Los Angeles and attended the three-prong Culver School campus for elementary, junior high, and high school. He was only 5'9" and 150 pounds in high school until his senior year, when he shot up four inches and gained about fifteen pounds. Culver won the league and McFerson made the Al-CIF Southern First Team. McFerson said he had more of a set shot in high school, but after he graduated and enrolled at San Bernardino Valley College, he worked on extending his arms without bending his elbows. By that time, he was 6'2" and still growing. He was named to the All-Southern California JC First Team. McFerson was living with an uncle in San Bernardino, whose son Pete Oliverias had played baseball for Pete Beiden at Fresno State University. Oliverias told then-Bulldog coach Bill Vandenburgh about McFerson. Vandenburgh was in the stands when San Bernardino came to play Fresno City College and offered McFerson a scholarship. McFerson led the team in scoring in 1961 with a 20.4 average and in 1962 with a 20.8. His highest scoring game was thirty-six against CalPoly of San Luis Obispo.