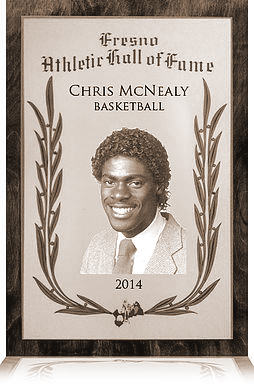 Perseverance paid off for the Fresno native who led Roosevelt High School to great heights in the late 1970s, was the backbone of San Jose State's program for three seasons and enjoyed a long professional career, including three seasons with the New York Knicks.

​The 6-foot-7, 205-pound forward played 12 years at the highest levels of European professional basketball, with eight years in Italy and four years in Spain, then embarked on a second career as an international scout evaluating talent for the Golden State Warriors and New Orleans Hornets.

​McNealy was a complete player, capable of leading his team in points, rebounds, blocked shots or even assists on a given night.

​He played one year at Santa Barbara City College before transferring to San Jose State, where he finished his career as the school's fourth all-time leading scorer (1,236 points) and sixth leading rebounder (678.) Playing for Coach Bill Berry, McNealy was selected first-team All Pacific Coast Athletic Association in both 1982 and '83 and was named honorable mention All-America. Showing how reliant the Spartans were on McNealy: he averaged nearly 37 minutes a game over his three seasons.

​After averaging 19.3 points and 9.4 rebounds a game and shooting 59% from the field as a senior, he was drafted with the 14th pick of the second round, 38th selection overall, in 1983 by the NBA's Kansas City Kings. A draft-day trade sent him to the Chicago Bulls, but McNealy played for Team Bic of the Italian League the following season.

​Spurred on by his dream of playing in the NBA, McNealy returned to the U.S. and played in the Continental Basketball Association. An impressive performance in the CBA All-Star Game, in which he scored 18 points and had 17 rebounds, earned him a spot with the Knicks in the NBA. His career averages for New York over 108 games were 4.3 points and 4.6 rebounds a game. McNealy returned to Europe, where he was a standout performer until retiring in 1999.

McNealy was inducted into the San Jose State Athletics Hall of Fame in 2004.