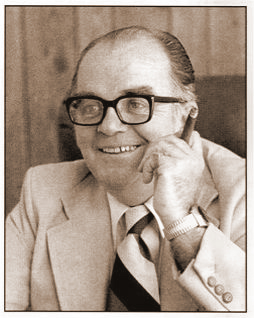 Picture a smiling Irishman with a cigar protruding from the side of his jaw and you have Tom Menan. Meehan has worn many different hats, met more world-recognized people, and tried more professions than anyone around. He did everything from promoting a Chocolate Thunder candy bar for NBA client Darryl Dawkins to receiving a private audience with Pope John Paul II in the Vatican. This Portland, Maine-born bundle of energy came to The Fresno Bee from the Hanford Sentinel, where he was sports editor, and stayed eleven years, covering everything he knew about and some things he didn’t. He has more stories than a mystery writer about his two years in the Marines, the highs and lows of managing well-known professional athletes, and as a police officer for a year in Port Hueneme.

One job offer he regrets turning down was from Oakland Raiders owner Al Davis to become Raiders General Manager in 1978. The Bee was far and away his longest stay on any single job, although he managed athletes for twenty years. He always had something else in the back of his mind days while performing whatever he was doing at the time. One of the first athletes that he signed was Daryle Lamonica, the former Clovis High star whom he had recruited for Notre Dame. Lamonica became an All-American at the Golden Dome and the "Mad Bomber" during an “All-Pro career quarterbacking the Oakland Raiders. In the late 1980s, he branched out to representing entertainers and had several movie ideas, but the Russians, who were going to finance the proposed films, backed out. During President Jimmy Carter’s administration, he was appointed U.S. Ambassador to the United Towns Organizations, a worldwide project headquartered in Paris to promote peace. While in the Marines, he met the likes of Ted Williams. Jerry Coleman, and Lloyd Merriman. He was the founder, general manager, and president of the professional basketball team, the Fresno Stars of the Western Basketball Association. He received numerous awards including the John Euless Hot Stove League trophy. Currently, he is a proud husband, father and grandfather and loves to reminisce about the good ole days.