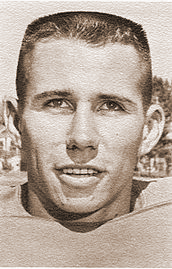 Dale Messer inherited some of his drive to excel from his father, but most of his early sports instruction came from then Island Elementary School principal Marion Jones. Messer became a famous track and football star at Lemoore High School, College of the Sequoias, and Fresno State, through the teaching and inspiration of Jones. The young principal had a wooden leg but few at Island Elementary knew it. Jones had lost his leg to a hay mower at a young age "Mr. Jones-a native of Iowa-was a good athlete," Messer said. "He could hit, run, and play shortstop like anyone else. He played softball and basketball with us at the elementary level. He had a little limp and his ankle wouldn't move, but we never noticed that."

When Messer reached the seventh grade, Jones realized he had a special athlete because of his speed. Jones went to Lemoore track coach Tuffy Burton and got five broken hurdles. Messer's father and Jones repaired the hurdles and Messer took his first step toward winning the state high hurdles championship in his senior year at Lemoore High.

Messer ran the high and low hurdles, long jumped, and ran on the relay teams at Lemoore. He also played baseball in his junior year and he said that's a story in itself. "I would work out in track during my free period and then play baseball at the end of the day," Messer said. "I really enjoyed baseball. I played center field and hit .500 that one year. Then during the state track finals that year, I was leading in the high hurdles, hit the last two hurdles, and finished fifth. That really upset me and I made up my mind no more baseball. I was just going to concentrate on track and it paid off because I won the state highs at Chico. I should have won the 180-yard lows in the Los Angeles Coliseum in my junior year. I was leading over the last hurdle, but Willie White of Centennial High in Los Angeles caught me in the final twenty yards." Messer regrets giving up baseball because he enjoyed it so much and had the feeling he could have gone further in that sport professionally than football. Messer's speed also made him a highly recruited football running back.

University of California was Messer's first choice, but the idea of going to Fresno State, staying closer to home, and being able to play three years won out. "I was married by then and had a summer job in Fresno, but the fact I could play three years after two was the deciding point." Messer said. "Wayne Crow and I played in the high school All-Star football game together and he tried to get me to go to Cal." Football was a different story. Playing three seasons, one under Clark Van Galder and two with Cecil Coleman, Messer set several career, single season, and single game scoring, rushing, and total yards records. He was also an excellent pass receiver, kick-off returner, and defensive back. He led the team in scoring and rushing all three years. He was named the FSC Athlete of the year in 1960. His #21 jersey was retired to honor him. In his senior year, Messer scored twice on runs and twice on pass receptions, all in the first half of a 66-0 blowout against San Diego State. He stayed on the bench in the second half.

p This was the day when the Cal Poly football team crashed on takeoff at the Toledo Airport, killing seventeen people and injuring twenty. That tragedy spawned the Mercy Bowl in the Los Angeles Coliseum in 1961, resulting in a historic Fresno State victory against heavily-favored Bowling Green in a 36-6 romp. Proceeds went to Cal Poly's victims' families. Messer had a three-year rushing average of 5.8 yards per carry with twenty-five touchdowns. He scored thirty-five total touchdowns and added twenty points after kicks. His versatility is mirrored in his 3,856 all-purpose yards with 1,912 rushing, 992 receiving, 569 kickoff returns, 297 punt returns and eighty-seven yards on interceptions. When Messer to played his final away game as a Bulldog in muddy Spartan Stadium in November 1960, he was a one-man gang. Veteran San Francisco Examiner sports writer Bob Brachman wrote that, "Dale Messer did everything, but pump up the football."Messer stated, "I scored, intercepted a pass, and quick kicked.
Honoring the Past
Celebrating the Present
Inspiring the Future
Contact Us
Tel: 559-448-0677
Fax: 559-448-0679
P.O. Box 27258
Fresno, CA 93729
info@fresnoahof.org
Connect With Us
The Save Mart Center