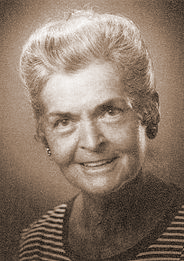 Vera "Granny" Miller is one of the most remarkable athletes to ever be inducted into the Fresno Athletic Hall of Fame. Miller began pitching softball at age ten and was still playing at age seventy-four when poor health made her quit the game. Only a few golfers and tennis players can claim a sixty-four year career. Miller also has the distinction of playing with three generations of children, grandchildren, and great-grandchildren. During the 1930s, she pitched for a men's team and her husband, Gene, caught. She had a great compassion for her family and her teammates and was able to balance the two for a satisfying and productive life which impacted those around her.

Miller was born in Raisin City on November 22, 1912 and died in Oakhurst on August 11, 2006 at ninety-three. She was a true pioneer in women's fast-pitch softball. She was an important part of 1953 and 1954 Fresno Rockets World Championship teams. Miller was married to Eugene D. Miller for forty-eight years and he preceded her in death. At thirty-three, she pitched a perfect tournament game in Cleveland, Ohio for the Rockets. Miller told Fresno Bee writer Jan Petersen that one of her regrets was that she had a fiery temper which caused her to quit the Rockets in 1957, when the Rockets won their third world title. In contrast to most of the fast-pitch stars of her day, Miller used a slingshot delivery which was easier on her arm.

She relied on pinpoint control, seldom walked anyone, and was able to make the batters hit ground balls or fly balls, letting her defense do the rest. "We always knew we'd have a lot of action when Granny pitched," said Rockets Hall of Fame third Baseman Jeanne Contel. "She had a lot of different pitches and could put them right where she wanted them."

Her first team was at Webster Elementary School after which she went on to pitch at Fresno Tech High School, leading to its first Fresno County title in 1928, the only softball championship in the history of that school. From 1931 to 1935 she toiled on the circle for three different teams in Bakersfield while still living in Fresno. In 1936 and 1937, she pitched for the Visalia Chicken Hawks. Miller and her daughter, Bette Tietgans, were charter members of the Rockets when they were formed in 1948. Miller took a hiatus from softball from 1958-1960, then returned to the Rockets. Probably no one in the state played for as many different softball teams. After her years with the Rockets, she would play in anywhere from two to four leagues a week and sometimes seven days in a row during tournament time. She played with her daughter and granddaughter, Sandy Garetson, in Dos Palos.

Miller moved to the mountain town of Ahwahnee in 1965 and formed a team, playing in the Oakhurst League and winning consecutive championships. She then moved to the Sierra League where she played first base for the Sierra Sweethearts. Miller continued to play for Dave Masonhalls' Sweethearts through l974. Her final season was in 1976 with both the Calwa and Sierra Leagues. It was then that she contracted shingles and was forced to retire. Miller was given the name of "Granny" early in her career because she was almost always older than the players on her teams or her opponents' teams.