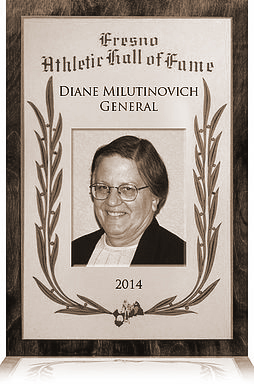 Milutinovich was a nationally recognized and much-honored advocate for women's athletics during her 27 years at Fresno State, a time in which the university made significant strides with its female sports programs.

​For 22 of those years, the Fresno High School and Fresno State graduate served in administration, rising to associate athletic director and senior woman administrator. During that span, she supervised 15 different sports. Among them: softball, volleyball, men's and women's soccer, women's basketball, wrestling, swimming and golf.

​Beyond Fresno State, she served as tournament director for more than 30 NCAA postseason events in four sports, including 17 softball regionals and 16 men's soccer matches.

​In 2010, after leaving Fresno State, Milutinovich received the National Award for Distinction from the Collegiate Women Athletic Administrators. Between 1993 and 2008, she received similar honors on the state level four times -- including recognition as the California Senate's Woman of the Year in the 16th District.

​State Sen. Dean Florez said that the Women of the Year honor was awarded in recognition of Milutinovich's "many contributions to women's athletics and her unwavering fight for gender equity in higher education."

​Milutinovich's advocacy for Title IX implementation and equity between men's and women's athletics often put her at odds with those who viewed athletics primarily as a man's domain. But she pressed forward with courage, ignoring the risks to her career.