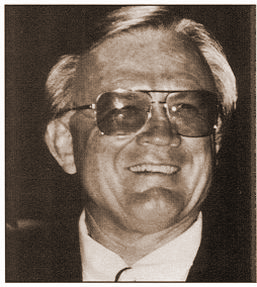 Bill Musick was one of the most successful community college wrestling coaches, winning four state college championships, twelve Northern California titles and seventeen conference crowns during a twenty-two year career at Fresno City College. His overall record was 247-50-5 with twenty-five individual state champions and three two-time state winners. When a state dual-meet championship was introduced in 1992, the Rams won four out of six. Musick coached the team three different times until he retired in 1997.

Musick was a fine athlete himself, winning the Valley Championship in wrestling while at Madera High School. After serving two years in the Army and bulking up in size, he played football for Bakersfield College. The Renegades won the conference during his freshman year and went 11-0 the next season, triumphing in the National JC Championship by whipping Del Mar, Texas 36-12 in the Pasadena Rose Bowl. Bob Burgess, the longtime Fresno State line coach, recruited Musick, tackle Monte Day, and center J.R. Williams from that team to play for Coach Cecil Coleman. During Musick's two seasons as a Bulldog, Fresno State lost just one game to Montana State on a field goal in the final seconds of the next-to-the-last game of the 1960 season. The next year, Fresno State's Mercy Bowl team was 10-0. "That was quite a run," Musick said of his college years.

After graduating from Fresno State, Musick coached football for two years at Fresno High School, then was hired as defensive coordinator for Claire Slaughter, coach at Fresno City College. Musick helped the Rams win four state championships. After fifteen years as an assistant, he was head coach for nine seasons. "Those state championship teams were incredible," Musick said. "They were practically all local players, usually outweighed, especially by those powerful Southern California teams such as Santa Monica and Fullerton, but we did have some outstanding players who went on to play at top four-year schools. They were smart, tough mentally and played better than we had reason to believe they could. The 1972 season stands out. We had lost by a big score to Fullerton in a non-conference game early in the year, but we won our conference and wound up in the JC Rose Bowl against Fullerton. The game was fogged out in the first quarter on Saturday night, so we played it Sunday and we beat Fullerton bad. It was one of the most satisfying games I was ever involved in as a coach."

After a couple bumps in the road, he found success as the Fresno City College wrestling coach. It started when the athletic director asked if he would take the program for a year while they looked for a permanent coach, Musick later stated. He went from fill-in coach to one of the premier community college wrestling coaches in the state for more than two decades.