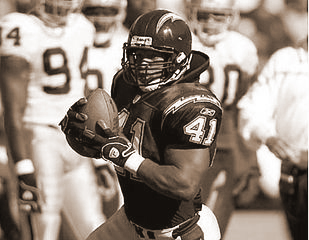 Arguably the best blocking back in NFL history, he paved the way for the 1,000-yard rushers over 11 consecutive seasons and was named to the All-Decade Team of the 2000s by The Sporting News. Neal, a fourth-round pick in the 1993 draft, created holes for some of the best tailbacks of the era, including LaDainian Tomlinson, Eddie George, Warrick Dunn, Corey Dillon, and Michael Turner.

Fullback is one of the most physically demanding positions on the field, but the 5-foot-11, 255-pounder proved especially durable over a pro career spanning 16 seasons. From 1994 through 2007, he played in an incredible 221 consecutive games - a streak that ended after suffering a broken leg.

The Lemoore High and Fresno State graduate was selected to four Pro Bowls and twice was named first-team All-Pro (2006,2007). Always in demand because of his ability to spring tailbacks and protect quarterbacks, Neal played for six NFL teams. His longest stints were with the San Diego Chargers (five seasons) and the team that drafted him, the New Orleans Saints (four seasons).

A reliable passcatcher, too, Neal had 199 receptions for 12 TDs during his career. He totaled 807 yards and six TDs on the ground. Neal came to prominence as a running back and heavyweight wrestler at Lemoore High, gaining more than 2,000 yards in a season and winning state wrestling title.

At Fresno State, he rushed for 2,405 yards in his career, twice was selected all-conference and was named the university’s Male Athlete of the Year in 1993.

His senior season, he was the Bulldog’s most valuable player in a Freedom Bowl victory over USC. He placed seventh in the 1992 NCAA wrestling championships.