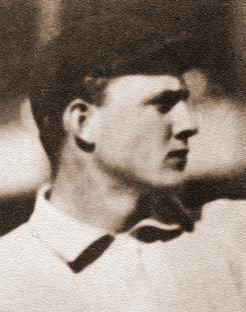 When Orval Overall was traded to the Chicago Cubs from the Cincinnati Reds midway through the 1906 National League season, it was history in the making. The powerful-throwing right-hander, who was born in Farmersville and raised in Visalia, joined one of the greatestpitching staffs in major league history: Mordecai "Three Fingers" Brown, Ed Reulbach, Jack Pfiester, and Carl Lundgren. By the 1907 opener, he was the ace of the staff. After the trade for Bob Wicker, Overall was 12-3 for the Cubs in a record 116-36 season. In 1907, he was the Cubs' opening day pitcher, a distinction that he held through the 1910 season when his mercurial career was cut short by a sore arm. In 1907, he was 23-8, tied the great Christy Mathewson with eight shutouts and posted a 1.70 ERA. Overall helped the Cubs win four World Series in five years.

Without the help of television, the World Series in the early 1900s was still big news and one of the best "money pitchers" was Overall. He won three of four World Series games (one in 1907 and two in 1908), all against the great Ty Cobb and his Detroit Tigers. In fifty-one innings of world series play, Overall had a 1.58 ERA. In three complete games, Overall limited Cobb to two hits in sixteen at bats. Overall won the first game of the 1908 Series and became the first Cubs pitcher to knock in the winning run. He clinched the Series in game five with a three-hit shutout and set a World Series record that still stands by striking out four batters in the first inning. One reached first on a passed ball.

During Overall's entire career, the Cubs were managed by Hall of Fame first baseman Frank Chance of Fresno, nicknamed the "Peerless Leader," and included Hall of Fame second baseman Johnny Evers and shortstop Joseph Tinker. Prior to turning professional, Overall was a legend at the University of California where in his senior year in 1904, he captained both the Bears' football and baseball teams. Overall played guard, punted, and was considered the "Dread of Stanford." He was an All-American in his senior year, excelled in agricultural science, and was voted the freshmen class president.

Orval was the first Berkeley grad to make it to the major leagues. After signing with the Reds, he was a starter in Cincinnati by 1905. His rookie year was the tip of his coming stardom. Overall compiled an 18-23 record in forty-two games and pitched thirty-nine complete games. He got off to a slow start in 1906 and was 4-5 when new manager Ned Hanlon traded him to Chicago. The rest is recorded history. Overall retired after his sore-armed 1910 season, but attempted a comeback in 1913 then retired for good. He became a prominent Fresno banker and was vice president and manager of the Fresno Security First National bank at the time of his death on July 14, 1947.