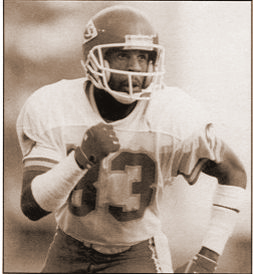 He wasn't as physical as most pro receivers, but Stephone Paige had everything else: speed, agility,athleticism, toughness and great hands. Paige's climb to gridiron greatness-ten seasons in the National Football League-began at Long Beach Poly High School and continued at Santa Ana's Saddleback Junior College and Fresno State. He spent nine years with the Kansas City Chiefs beginning in 1983 and his final pro season with the Minnesota Vikings. Paige had a record-setting career with the Chiefs, catching passes in 83 consecutive games. He is listed among the Chiefs' top receivers for twenty-plus yard receptions (15), 100-yard games (10), and yards per career with 6,341. The signature game of Paige's pro career was undoubtedly the December 22, 1985 match-up between the Chiefs and long-time rival San Diego Chargers. His receptions that day totaled a record-setting 309 yards for the Pro Bowl-bound Paige.

As a kick returner in 1985, he gained 544 yards on twenty-seven returns for a 20.1- yard average. A lean target at 6'2" and 184 pounds, Paige learned his pigskin basics playing for the Poly Jackrabbits, one of the nation's foremost prep athletic programs. Later, Paige's outstanding performances for the Bulldogs placed him in a select group of the school's all-time best receivers that included Henry Ellard, Charlie Jones, Bernard Berrian, and Rodney Wright. His accolades included selection to the California Junior College Hall of Fame.