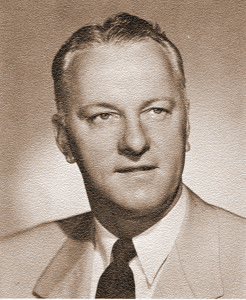 The World Series has always been the showcase of baseball. Few stars shined brighter in the fall classic than Monte "Hoot" Pearson, an Oakland native who moved to Fresno as a child. Pearson received his baseball baptism in the Fresno Twilight League. After attending Fresno High School and the University of California, Pearson was signed by the Cleveland Indians at twenty-one. He spent a year with Bakersfield in the California League in 1929, pitching the following year for Phoenix in the Arizona State League. Pearson spent two years with the Oakland Oaks in the PCL and another with Toledo before being called up to the big club. At the tail end of the 1932 season, he threw eight innings in eight games and his ERA was 10.l3. In his first full season in 1933, he was 10-5 with a 2.33 ERA. The following year, he was 18-13. In 1935, Pearson's numbers shrunk to 8-13 and he was shipped to the Yankees by Cleveland. The timing couldn't have been better. In 1936, the Yankees started their remarkable four-year World Champion dominance.

In four appearances from 1936 to 1939 in the fall classic for the World Champion New York Yankees the 6', 175-pound right-hander Pearson with his pitching arm did what Reggie Jackson did with a bat so many decades later. He started and won in all four of his world Series appearances including a 4-0, two-hit shutout of Cincinnati in 1939. Pearson no-hit the Reds for seven and a third innings. That tied a series record set by Herb Pennock in 1927. Pearson faced only twenty-nine batters. He allowed one walk and fanned eight. It was the first world series shutout by a Yankee pitcher since Wayte Hoyt against the Giants in 1921. It was regarded by sports scribes as one of the best pitching performances in world series history. Three of Pearson's four games were a complete nine-innings and he went 8 2/3 in the other. He gave a combined total of nineteen hits and five runs for a 1.01 ERA.

He struck out twenty-eight and walked seven. The fourth game of 1936 World Series attracted the largest crowd for the time of 66,669 at Yankee Stadium. Pearson dueled with the great New York Giants left-hander Carl Hubbell who had won the Series opener against Ruffing. This time Pearson prevailed 5-2. It was his first series game and he handled it like a veteran. He gave up seven hits, walked two, and fanned seven. One of the big Yankee hits was a three-run homer by the legendary Lou Gehrig. Pearson even tagged "King Carl" for a single and a double. Pearson had a 19-7 record for the Yanks that year and had been tabbed to pitch the opening game when a mysterious back ailment-a combination of lumbago and pleurisy-threatened to eliminate his appearance. Pearson had a big role in his first year in New York, finishing 19-7 which was the best winning percentage in the American League and he was second in wins on the New York staff to Red Ruffing, who was 22-12.

After a sub-par 9-3 in 1937, he was back on track in 1938 with a 16-7 record which included a no-hitter against his old team Cleveland. Pearson's biggest problem that season was control; he struck out ninety-eight and walked 113. Aches and pains limited starts and innings during his final two seasons with the Yankees where he was 12-5 and 7-5. He was traded to Cincinnati where a sore arm allowed him to pitch only 24.1 innings with a 1.3 record and a 5.18 ERA in 1941. Pearson said his arm problems began in1939 while pitching against the great Bob Feller. "I tore a shoulder ligament while making a routine play on a ground ball in the fifth inning. I stayed in the game and actually won in fourteen innings, but my arm was never the same."