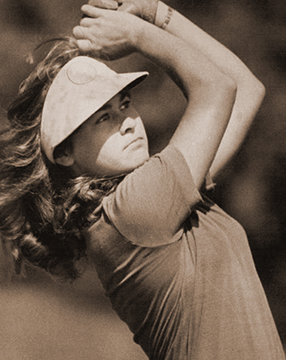 The late Al Pitcock said that when his nine-year-old daughter Joan hit her first golf ball with a club, it went 150 yards straight down the middle. He knew then she was going to be something special. Once Joan got hooked on the game, she benefited from the teaching of the late Vic Lombardi at Fig Garden Golf Club. "Vic was such a great athlete, a major league pitcher, and a fine golfer, and he gave me my first formal instruction, said Pitcock. "He was a lefty, but he gave me the fundamentals that stuck with me throughout my career."

Pitcock qualified for the LPGA in 1987 and during fifteen seasons, earned $1.3 million in an international career that included winning the 1996 Jamie Farr Classic by a single stroke. Twice, she played on the United States team at the Nichireir International which pitted the best from the LPGA against the best from Japan. Pitcock was 2-0 in those matches: one of her most cherished memories. "I had a lot of success in the juniors and amateur events and twice qualified for the U.S. Open when I was pretty young [15-16], so I felt I could compete," Pitcock said. "I didn't really think about age or who I was playing with, but just matched up my skills. That victory [at Jamie Farr] was in my ninth season. It takes a long time out there to learn to win. I just tried to get better each year. Although the accomplishments are few, the effort level remains the same. You try so hard. I played in the final group in the last round nine times before I won."

Pitcock's amateur career was the best among Fresno female players since Shelley Hamlin. It included winning the Fresno City Amateur at every age level that she entered. During high school, she played on the boys' golf team at Clovis West because there was no girls' team at the time. Pitcock played volleyball as well and suffered the worst injury of her life in her junior year when she tore all of the ligaments in her left ankle. That injury ended her quest for any sport except golf. "Being inducted into the Fresno Hall of Fame was more like a celebration of my effort out there," Pitcock said. "I was out there for a lot of years and you don't always see the day-to-day results, but I never quit on a game of golf." Pitcock said she played in the final group several times in 1995 which was her best year money-wise. Her teacher while on tour was Kent Casey. Pitcock was a two-time American Junior Golf Association All-American. Two years later, she won the prestigious Optimist Junior World Championship at Torrey Pines and was the low amateur in the U.S. Open.

Pitcock set several course records as an amateur. At sixteen in the America's Cup playing at the difficult Dunes course in Las Vegas, she followed a 39 putt, 78 with a six birdies, an eagle, and only two bogies for an amateur course record of 68. It was a stroke more than pro Nancy Lopez's record of 67. That same season, she had records of 72 at Visalia Plaza, 74 at Tulare Country Club, 73 at Pine Mountain Lake, 76 at Oakdale, and a course-tying 73 at Riverside. She opened eyes early on in the LPGA when she shot a 63 round in her rookie season. Pitcock participated in two mixed-doubles matches with longtime Fresno friend and PGA golfer, Bill Glasson. When she retired from the LPGA, she returned to Fresno. Pitcock plays a few corporate sponsor games and helps to coach her former high school team.