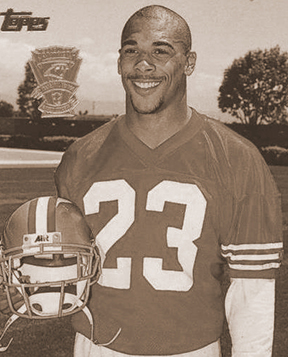 Ten-year NFL veterarn Marquez Pope stated, "I just always asked the Lord to send me wherever he thought I should be and I guess he wanted me to be in California." The native of Nashville, Tennessee was recruited by many colleges who were interested in his abilities on the football field, but he chose coach Jim Sweeney and the Fresno State Bulldogs. California would also loom large in Pope's NFL career after he became, and still is, the only player in NFL history to play for the four California professional teams: the San Diego Chargers. the Los Angeles Rams, the San Francisco 49ers, and the Oakland Raiders. Marquez competed at Fresno State from 1988 to 1991 and was truly one of the leading "hitters" on the Bulldog's big hit parade of tough defensive backs. He was a three-time AIl-Big West safety and twice won the Big West Conference Defensive Player of the Year Award. During Pope's tenure at Fresno State, the Bulldogs had a record of 39-7-1 while winning the Big West championship three times and picking up a couple of Cal Bowl victories. "I salute our coaches for the great teachers that they were, from Coach Sweeney and all his many assistants like Cliff Haskell, Pat Hill, Willy Robinson, and so many others. They helped us in many ways that led to our time in the NFL, as well as in life," says a grateful Pope.

He would often see some of his former FSU teammates around the professional ranks which he and the others felt was a great tribute to their college coaches. Marquez kept up his winning ways in the NFL as well. In his ten seasons in the "Big Time," his teams made it to the playoffs six times. Drafted by the Chargers as the fifth pick in the second round and 33 pick overall, Pope began his NFL journey which would lead him to his well-deserved reputation as a hard-hitting and lightning-quick cornerback. "Again, I have to thank the Lord for the fact that I was always pretty healthy through my career and even feel great today," says Marquez. At 5'11" and 193 pounds, he was still able to hit with authority In 1994, he was the second leading tackler for the Los Angeles Rams before being traded to the San Francisco 49ers. In his four years there, he would establish himself as the team's right cornerback and one of the leading tacklers with Ken Norton, Bryant Young, and fellow Fresno Athletic Hall of Famer, Tim McDonald, as the 49ers made the playoffs in each of those years under George Seifert and Steve Mariucci. In 1999, Marquez was with the Cleveland Browns at strong safety and again he was the third leading tackler for his team. By then a seasoned veteran, he longed to be back on the West Coast and that wish was granted when he signed with the Oakland Raiders under coach Jon Gruden. Once again, Marquez was one of the playoff-bound team's leading tacklers from the Raider's strong safety position.