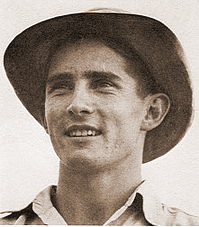 Jim Price, who was handsome enough to play a role in A River Runs Through It, parlayed a boyhood love for fishing into a championship casting ability on a national competitive level. The Fresno-born and Fresno High School alum, Price developed his rod, reel, and fly casting abilities at the Roeding Park pond where many Fresnans throughout the years have fished. Price's accuracy was such that his casting colleagues urged him to enter his first tournament in San Francisco in 1939. Price returned to Fresno with the Western Junior for Boys Accuracy Championship title for sixteen and under and 5-Ounce categories. This was just the beginning.

In 1940, he entered the Western Senior Tournament in Huntington Beach, winning the Skish (ordinary tackle and reel), Fly, and Bait championship. His confidence soared and Price decided to enter the National Association of Angling and Casting Clubs competition in St. Louis, Missouri. This time, he won the 3/8-ounce Accuracy Bait and Fly Champion. He also topped the national field for All-Round Accuracy by compiling the highest point total of the four accuracy events for which he was selected the NAACC Captain of the Al1-American casting team. In 1941, his success continued when he bested the field in the Western Senior All-Round Accuracy competition in Turlock. He again entered the NAACC meet in St. Louis to defend his title and squashed the field, winning every division which included dry fly, all- round, skish bait, and all-round skish.