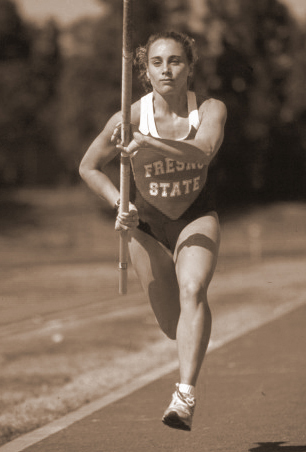 A trailblazer for women pole-vaulters all over the world, Lewis soared into the USA and NCAA record books and the USA Pole Vault National Summit Hall of Fame. High School girls could only compete in the event in ‘exhibitions’ against boys when Lewis was at Kingsburg High School. But after a court ruling paved the way for girls to compete for real, Lewis entered and won the event at the Bob Mathias Fresno Relays by clearing 9 feet, 9 inches and setting a state prep record in 1994. A sophomore at the time, she was bound for loftier heights, including competing in the Goodwill Games. The following spring, she cleared 11-1, again in the Bob Mathias Fresno Relays, to set the national women’s pole vault competition at the USA/Mobil Outdoor Track and Field Championships in Knoxville, Tenn. Her senior season and the following summer produced more records and entries into international meets. It was at USA/Mobile Outdoor Track and Field Championships in Sacramento that she pushed her American outdoor record to 12-9 - a week after winning the state high school title in Cerritos. Before the summer was over, she would elevate the national women’s mark to 13-1 ¾. Lewis, who was known to train up to eight hours a day, was just as dominant at Fresno State. The NCAA had originally set 2000 at the first year to sanction women’s vaulting. But pressure from coaches moved the date ahead two years. With the event certified, Lewis became Fresno State’s first female individual national champion. She won NCAA indoor titles in 1998 and 1999 and set the NCAA outdoor mark (14-3 ½) in 1998. Lewis was a three-time All-American and two-time Western Athletic Conference indoor and outdoor champion. She competed in the 1997 World Indoor Championships and 1999 World Championships.