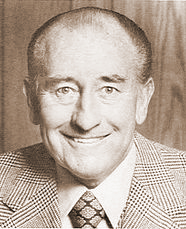 Bruce Farris once said, "Every town needs a cheerleader, and Al Radka was certainly Fresno's. Everywhere he went, Al would be talking about Fresno and what a great place it was to love. "The sixty-six year love affair between Al Radka and Fresno began in 1937 when a young Al Radka came to play football for Fresno State. The red-headed Radka had been a star lineman for the Moors of Alhambra High School in the Los Angeles area. He went on to Pasadena City College, playing well enough for the Lancer to get offers to play at some four-year colleges, Fresno State among them. Bulldog head coach, Jimmy Bradshaw was pleased to get the young guard with the high-spirited personality to go along with his red hair. Legend has it that Radka, while on the defensive line, spent so much time in the opponents backfield, making tackles, that he was known as "Raider Al" around the Far Western Conference. He made the All-FWC team in 1939. He was also named as one of the guards on the Fresno State all-time football team.

Al was the student body president at Fresno State in the 1938-1939 school year. Besides playing football and being involved in student government, he found time to write, produce, direct, and appear in three annual FSC Spring Swing great place it was to live" Musicals. After graduation in 1939, Al decided to settle down in his adopted hometown. He married the love of his life, Alma, a Fresno native. This man of many talents then began his working career as a sports writer for The Fresno Bee. He was the part-time announcer/entertainer at Euless Park, home of the Fresno Cardinals and Fresno Giants, both minor league baseball teams. Al was involved in helping to make Fresno a better place to live. He was the vice president of the Fresno Junior Chamber of Commerce, the chairman of the Raisin Bowl game, and served in the Air Corps. He entered the corps in 1942 as a private and, when discharged in 1946, was a captain.

He is most notably known for his local, legendary career in radio and television where he became "Mr. Fresno" and was the favorite local celebrity in Fresno for many years. Even though he was a very busy man, Al always looked for ways to make contributions to helping and stirring up interest in sports. He was always available to help raise funds for sports programs in the area and served tirelessly on many committees to help build and raise money. Al was an early member of the Bulldog Foundation in the 1950s and he helped to create one of the most successful college programs in the United States. The Fresno Hot Stove League dinner was one of the best-known and most successful events in the city's history. Under Al's guidance, the annual dinner drew many of the great baseball players of the day to Fresno for the annual fundraiser.

Stars like Johnny Bench, Billy Martin, Brooks Robinson, Willie Mays, Casey Stengel, Don Drysdale, Vida Blue, Joe Morgan, Robin Yount, and a Fresno favorite, Willie McCovey, who came back three times, are just a short list of the many players that came to the dinner at Al's invitation to raise money for Fresno youth programs. Most of the players attended at far below their usual appearance fees. In his retirement, Al loved to play golf with his buddies, to make appearances, and to return fan mail even as he got older. Al Radka died in March 2005. The City of Fresno dedicated the Al Radka Park, complete with two baseball fields, a concession area, walkways, and bleachers. The park is located on Belmont, just south of Fowler Avenue. There is also a memorial with a beautiful sculpture of "Mr. Fresno," Al Radka.