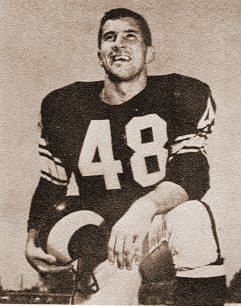 Leslie Allan Richter holds the distinction of being the only professional football player to ever be traded for an entire eleven-man team. With today's inflated salaries and signing bonuses for rookies, it will never happen again. His roots were in Fresno where he was an All-Valley blocking back and linebacker at Fresno High School in the 1940s. Richter was a top recruit for storied Cal coach Lynn O. "Pappy" Waldorf, earning All-American honors three times, playing in three Rose Bowls, and winning three conference championships. He also competed in rugby at Cal which was good conditioning for football and allowed him to pummel opponents wearing little protective equipment.

After graduating from the University of California, Berkeley in 1952, Richter was the number one draft choice of the New York Yankees football team. Before he could report, seventeen Texans purchased the Yankee franchise for $170,000. They immediately moved the team to Dallas, becoming the Dallas Texans. Dallas needed players and didn't want to pay Richter his asking price, so they arranged a blockbuster trade with the Los Angeles Rams. Dallas received six current Rams and five more acquired on draft choices in exchange for the 6'2", 240-pound Richter. During the trade announcement at a lavish news conference, the Rams presented Richter with a $7,500 contract and a $500 bonus. "I just asked one question," Richter said in a 2006 interview at his Riverside home. "Where's the pen?"

No negotiations, no agent, but a satisfied player. However, Richter's National Football League debut was sidetracked for two years while he served in the Army during the Korean conflict. Meanwhile, any time that the Rams were not doing well during those two years, the Los Angeles media wrote stories about this "Mystical Superman Richter" and gave their readers a countdown on when he would join the team. That day came in 1954. Richter recalled that he received a "cold, very cold'" reception from the veteran Rams players. It took a couple of All-Pro years before he was fully accepted, but he enjoyed nine seasons with the Rams with seven as a Pro Bowl pick and became one of Ye Olde Rams Club's most popular players. He played 112 games which is the most in Los Angeles Rams history. "I thoroughly enjoyed my nine years with the Rams," Richter said. "We had a lot of fun, which I feel is missing today." Richter gained the most notoriety as a linebacker, but he also played offensive center or guard, kicked off, and was an outstanding place- and field-goal kicker. He played hard and his body took a beating.

A Los Angeles Times column by the late Jim Murray written before Richter's last game with three-time All-American at Cal Berkeley New York Yankees football team's #1 draft pick Seven-time Pro-Bowler for L.A. Rams Played 112 games, a Rams record the Rams in 1962 revealed that Richter had a list of injuries that would have caused most players to retire early."...His nose was broken five times, he had a twisted ankle, two broken fingers, cartilage problems in both knees, and 123 stitches," Murray wrote. "Once, he showed up in Philadelphia on crutches and forty minutes later kicked the winning field goal. He received seventeen stitches from a hit by Don Joyce of the Chicago Bears and John Henry Johnson ripped open the side of Richter's face." Actually, the Joyce hit was after the Bears end had been blocked twice by Richter on the same kickoff. Joyce tore off Richter's plastic face mask and helmet and hit him in the eye with his fist.

Richter was inducted into the College Football Hall of Fame, the NFL Hall of Fame, and was among the first six named to the Fresno Athletic Hall of Fame in 1959. When Richter's playing days ended in 1962, he turned down pressure from alumni and friends to coach at Cal. Instead, Richter, his former Berkeley teammate Bob Karpe, and University of Southern California's Frank Gifford formed a real estate firm. They called it CALSC after their alma maters. Richter also plunged into the sport of auto racing and spent a couple of years in Daytona, Florida to learn all that he could. He returned to California and was president of the Riverside International Raceway and later Director of Racing for twenty-one years.

Never one to do anything halfway, Richter brought enthusiasm, vision, and new ideas to transform Riverside Raceway from a 2.65-mile road course negotiated on 600 acres of weeds and rolling terrain, portable bleachers, and no communication system to one of the premier California auto racing facilities with 20,000 seats, a refurbished track, and plush offices. Richter was as smart about racing as he was tough in football. Through the years, he consulted with some of the greatest minds in auto racing management. Richter devised a checklist of "things to do" and it still is a standard guideline used in many tracks throughout the nation. Richter got to know all of the NASCAR racing legends and second generation drivers. He once said he could attend a race somewhere every weekend. For a guy who never drove a race car in competition, he was held in high esteem in the auto racing world by drivers. car owners, and track employees. Karpe said of Richter: "Les was a tremendous competitor in anything he did. He simply worked harder than anyone in practice. It was the same with the race business."Les Richter passed away on June 12, 2010 at the age of seventy-nine."