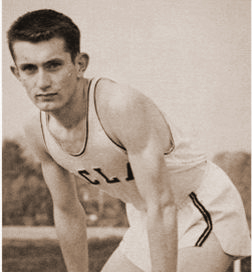 In August 1962, Bob Seaman ran the mile in 3:58 at Whitesbridge Stadium in London, England, becoming the first, and to this date the only, Valley-born athlete to beat what, at that time, was the magic mile mark. Seaman had a remarkable track career as a competitor, assistant, and head manager of United States Olympic women's teams and as an official at track and field events. He also had a thirty-year association with the United States Amateur Athletic Union and Olympic committees.

The Fowler-born and raised three-sport athlete helped breathe life into a UCLA track program which was a stepchild to rival USC. In 1953, the year before Seaman and a talented freshman class arrived on the Westwood campus, the Trojans had buried the Bruins in their annual dual meet 120-11. In Seaman's senior year, UCLA snapped an amazing USC thirty-year reign by winning the Pacific Coast Conference title by two points. Seaman remembers being part of the Reedley Grant Elementary School 880-meter relay team which won and set a record at the West Coast Relays. At Reedley High, he was an end for two years and right halfback his senior year. He was part of the Pirates team that twice beat Kingsburg High powered by Rafer Johnson and Monte Clark. In basketball, he was a 6' forward for the team that was unbeaten in the North Sequoia League and captured the Fresno County championship.

His senior year, he ran track and reached the dream of all prep runners by winning the state mile in 4:21 at Ratcliffe Stadium. The meet was scheduled for Norwalk in Southern California, but rain forced it to Fresno, marking the only time the state meet was held on that historic clay track. Seaman's time bettered Lou Zamperini's national high school mark which caught the eye of college recruiters. Seaman was set to enroll at Occidental College until Ed Narjarian, UCLA Class of 1935 and a Reedley clothier, got involved. Narjarian spent three hours talking to Seaman and his mother. He finally convinced Seaman to go to UCLA instead of Occidental. It was ironic: the two times Seaman ran on Bruin world record relay teams, they were beaten by Occidental teams. Nevertheless, Seaman never regretted his choice. "UCLA only had one coach, Ducky Drake, when I enrolled," Seaman said. "The boosters and school officials wanted to pump up its track program. Ducky had to handle everything and he also was the school's head trainer. They hired UCLA Olympic high hurdler Craig Dixon to assist Drake and coach the freshmen and cross country teams.

Things started to move then. I set a national freshmen record of 1:49.9 in the half mile and ran the mile in 4:14." In his sophomore year, Seaman lowered his mile time to 4:01.4 and during the Compton Relays nearly caught the great Kansas miler, Wes Santee. Seaman placed third in the NCAA mile behind American stars, Jim Beatty and Bill Dellinger. Seaman beat Dellinger in the PCC versus Big Ten meet 4:04.2 to 4:04.6. In 1956, the Bruins ended the Trojans 50TH ANNIVERSARY EDITION complete domination of the PCC. Seaman said ten minutes after celebrating the victory, the announcement came that UCLA, USC, Washington, and California had been placed on a three-year probation for recruiting violations. The following week, UCLA took the NCAA championship with Seaman fourth in the mile which was won by Ireland's Ron Delaney. One of Seaman's "bitter pills" was next when he finished fifth in the US Olympic trials. "I was kinda worn down after the long season, but the crowning blow, I think, was our appearance on the Ed Sullivan show the week of the trials," Seaman said. "I had to stand around for hours while they filmed the dedication of our new track. I should've been on that team."

Another frustrating moment came a year later in a dual meet with Occidental. Seaman was clocked at the 1,320-meter mark in 3:02.5 and, knowing he had to run the two mile later, just coasted in. "I thought-and Dixon agreed-if I had been selfish and gone all out the final quarter I would have broken four minutes," Seaman lamented. In the 1957 West Coast Relays, Seaman anchored the Bruin team which eclipsed the distance medley record, but still lost to Occidental. In the Coliseum relays, the Bruins beat the world 1,600-meter mark by four seconds, but still placed second. At Compton, he finished second to British Olympic medalist Herb Lincoln. The next day, he looked forward to an 880-meter race with California 's Don Bowden. Seaman was thrown a curve when Bowden entered the mile instead. "I beat Bowden, Dellinger and Beatty in the AAU meet and was named the 1957 American Mile Champion of the Year,” Seaman said.

The next two years were spent on the East Coast to fulfill a military commitment. It was in 1962, while on tour with the Los Angeles Athletic Club, that he clocked his 3:58 in London. He was sixth in the 1962 AAU, fifth the following year and then developed an Achilles heel injury that ended his competitive career. Seaman began a thirty-year association with the AAU in 1968. For twenty years, he helped set qualifying standards for national championships. Bob was the women's track chairman from 1972 to 1990. He was assigned to help with the junior national team on tour to Latvia and was voted manager of the World Cup team in 1979 in Montreal, assistant manager of the U.S. Women's Olympic team in 1984, and head manager of the women's team for the 1988 Korean Olympiad. “That was the highpoint of my career," Seaman said. " was manager of arguably the best U.S. women's team ever. We won more medals and set more records than the Russians and East Germans. It was a pleasure being there." Retired Fresno State track coach, Red Estes praised Seaman as "one of the best officials we ever had at the West Coast Relays." Seaman's last tour was in l996 and at age sixty, he retired. "Overall it's been a very interesting life which had taken me around the world and then some. It was an era when track and field world records were big headlines. Now, they are just another story. I watched and managed the best."