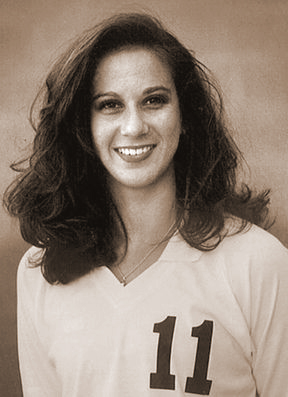 Quite possibly the best all-around female athlete in Fresno County history, she was a four-year letter-winner and star performer in basketball, volleyball, and tennis at Reedley High School.

She appeared poised to make her mark at the collegiate level in basketball, a sport where she set the Reedley career scoring mark (1,255 points) and earned All-NorCal honors her senior season.

But, after one year at Kings River Community College - during which she helped the Tigers win a conference volleyball title and partnered with Amy Hudson to win the NorCal doubles tennis championship- the 5-foot, 9-inch Ainger-Schulte chose to concentrate on volleyball when she transferred to Fresno Pacific College.

It proved to be the right choice as Ainger-Schulte led Fresno Pacific to the NAIA national volleyball tournament three consecutive years. An all-around standout who excelled in kills, as well as passing and digs, she was a rare three-time first-team All-American. And, in 1996, after Fresno Pacific’s 30-5 season, she was named NAIA National Player of the Year.

In 2003, she and Fresno Pacific volleyball Coach Dennis Janzen became the university’s first inductees into the NAIA Hall of Fame.

At the time of her induction into the Fresno Athletic Hall of Fame, Ainger-Schulte ranked among the NAIA’s all-time top 10 performers in many season and career categories. In a 1994 national tournament match against St. Mary’s (Texas), she set an NAIA record with 61 digs. And, in the 1996 national championships, she reached double figures in kills and digs in all five matches.

During Ainger-Schulte’s three years, Fresno Pacific had a 97-19 record, finishing fourth in the nation in ‘94, tying for third in ‘95 and placing fifth in ‘96.

In addition to her natural talents, Ainger-Schulte utilized her intensity, court awareness, and dedication to practice to reach the top in volleyball. She carried those same traits into coaching and teaching, becoming head volleyball coach at Fresno City College in 2007 after assisting at Fresno Pacific and Clovis West High School.