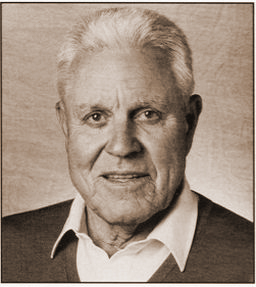 Simmons’ name is synonymous with Bay Area baseball, the San Francisco 49ers and the “tell-it-good” home run call. Emblematic of his talent and longevity in the broadcast booth, he was on the air for the San Francisco Giants’ Opening Days at Seals Stadium (1958), Candlestick (1960), and Pacific Bell Park (2000).

Before joining the 49ers (‘57) and Giants (‘58) broadcast teams, he was sports director at KMJ in Fresno and announced Fresno State football, basketball, and baseball games.

For his first 13 seasons with the Giants, he was paired with Russ Hodges on what arguably was the greatest broadcasting team in Major League history. The broadcast facilities at Pacific Bell Park were named in their honor.

With his distinctive voice, Simmons provided stirring accounts of the Giants’ most memorable games and descriptions of their greatest players, including Hall of Famers Willie Mays, Willie McCovey, Juan Marichal, Gaylord Perry, and Orlando Cepeda, and home-run champion Barry Bonds.

He also was the play-by-play announcer for the Oakland A’s for 15 seasons, teaming with Bill King, another Bay Area broadcasting legend.

Simmons was equally adept at conveying the drama and excitement of professional football, as evidenced by his 15 seasons of outstanding play-by-play accounts for the 49ers (1957-80, 1987-88).

Simmons originally hoped to make it to the big leagues as a player. But an injury ended his career after two minor-league seasons in the Philadelphia Phillies organization.