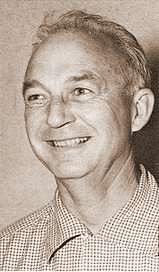 Fresno native, Justin Simons was referred to by his teammates as "Judge" because of his quiet demeanor. He signed as a catcher with the Fresno Tigers following graduation from Fresno State in 1923. His professional career included seasons in Salt Lake, Utah, Little Rock, Arkansas, Muskogee, Oklahoma, and then to the Pacific Coast League with the San Francisco Seals, the Los Angeles Angels, and the Toronto Maple Leafs. After retiring from the professional game, Simons returned to Fresno where he played and managed in the famed Fresno Twilight League through the mid-1930s. He made the Fresno City All-Star team and played several times in the Little World Series. Simons also competed for the Coalinga Oilers in the Valley League and with Roma Wines in 1945. One of his biggest local contributions was to youth baseball. He served as an assistant coach for the Fresno Bee, KMJ and KMJ-TV Baseball Schools. Simons helped found Spartan League baseball in Fresno and served as president of the North League for eighteen years. In 1969, he received the Raymond Quigley Award for service to the youth of Fresno. His son, Tim, who became an outstanding football coach at Clovis High School, was later an assistant at Fresno State. Tim served as a coach and athletic director at Clovis North High School. Justin Simons died in 1979 at seventy-five.