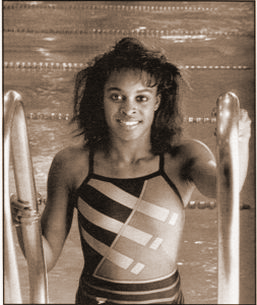 Sybil Smith was an athlete with a unique record. The San Joaquin Memorial swim star was the first African-American woman to place in the top eight at the NCAA Championships, and in doing so, became the first female All-American swimmer in Boston University History. Smith was just five years old when she learned to swim in a backyard pool and was a natural. The Fresno native quickly advanced as one of the finest age-group swimmers in the country. The hard-working 5'5" dynamo dominated her high school competitors while at Memorial where she became the first Central Section swimmer to win eight individual titles. At Boston University, she compiled a remarkable four-year unbeaten streak in dual meets with eighty total wins. While swimming for the Terriers, she set school records in the 50-yard freestyle (23.12), 100 free (50.30) and 100 butterfly (56.61). She was recognized for her efforts as the outstanding swimmer at the Eastern Championships. During the 1988 NCAA Championships, Smith finished sixth in the 100 backstroke and qualified for the Olympic Trials, but she failed to make the team in the 100 free.

Following her graduation from Boston University, she earned a Master's degree in counseling and consulting psychology from Harvard and served as an assistant coach of the Harvard swim team. She supervised a minority aquatics program for the International Hall of Fame in Fort Lauderdale, Florida for two years and was inducted into the Boston University Hall of Fame in 1993.