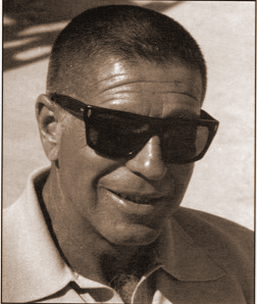 Gene Stephens certainly was one of the most influential people in the sport of swimming and water polo in San Joaquin Valley history. Not only did he teach hundreds of youngsters how to swim in his First Street pool, but he also founded the Fresno Swim Club. His teams from that facility produced record-setting boys and girls topped by Fresno Athletic Hall of Fame inductee Heather Greenwood Harper, who set a world record in the 400-meter freestyle in 1974 at the age of sixteen. Stephens coached the Fresno City College swimming and water polo teams for twenty-one years.

Stephens came to Fresno in 1946 after serving as a U.S. Navy swim instructor and went to work right away. Stephens founded the Fresno Swim Club because he felt a number of the area's top swimmers were not reaching their potential through a lack of high level competition. The club never did have an Olympic-sized pool, but that didn't prevent Stephens from producing a list of top performers such as Eric Riedel, Kathy Seidel, and Mark Greenwood. In his home pool, he taught his daughter Becky, who became a three-time Central Section Champion for Hoover High School from 1972 to 1974 and grandson John Allen of Clovis High, who won the Central Section 50-yard freestyle in 2002 with an All-American time of 20.07 seconds. Stephens didn't keep his teaching techniques secret. He authored a book titled, Teach Your Child to Swim, in 1957. In 1990, Stephens was named National Swim School Association Coach of the Year. His most famous pupil was Skip Kenney, who went on to coach seven national championship Stanford University teams and the 1996 U.S. Olympic team. After Stephens' funeral in 2003, Kenney stated, "Without his influence, I wouldn't have been coaching swimming at all. The main reason l'm coaching swimming today is because of Gene Stephens."