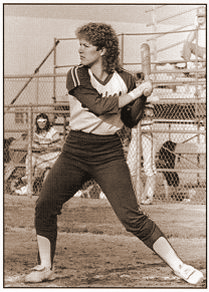 Gena Strang-Behrens, the first Fresno State athlete to earn All-American honors three years in a row, was a key member of the Bulldogs when they emerged in the 1980s as a national softball Powerhouse. During Strang-Behrens’ four-year career at Fresno State University 1985-1988 the team compiled a record of 202-64-1. She helped lead the Bulldogs to four conference championships and a runner-up finish in the Women's College World Series in 1988, with a career batting average of .280. Strang-Behrens, who played first base, was named to the All-Conference team four times and was Co-Female Athlete of the Year for Fresno State in 1987. The Pacific Coast Athletic Association named her the 1988 Female Scholar-Athlete. She collected 216 hits and 108 RBIs and ranks in nine Fresno State all-time batting categories. She never expected to leave such a mark on the Fresno State softball team.

Despite leading the Hanford High School softball team to a Valley Championship her senior year, Strang- Behrens figured she was headed for junior college, and would try to walk on to the softball team. "But my coach at Hanford, Leslie Steffen, got in touch with Fresno State, and all of a sudden, I was going to play softball for the Bulldogs, and with a partial scholarship as well. I was so excited," Strang-Behrens said. She played that first year for Coach Donna Pickel, who recognized Strang-Behrens' potential and batted her third or fourth in the lineup. Four games into her freshman season, she was the starting first baseman.

The following season, Margie Wright took over as the Bulldogs' coach. It was the beginning of a great program, one that would eventually lead to Fresno State's first NCAA Division One Championship. "Margie had a vision, and what she was teaching was great for me. Conditioning, structure, and discipline-and I learned a lot from it," Strang-Behrens said. "She was tough, but she knew when to be tough and when not to be." The combination of Coach Wright and players like Strang-Behrens, Martha Noffsinger, Carrie Dever, Lori Romeiro, and others helped Fresno State develop into a national force in softball. "We had a great time," Strang-Behrens stated, "The team really got along wel1, but we worked hard to get where we did. We fought hard and we knew we did the best we could." In 1992, Strang-Behrens was asked to try out for the Olympic team. Although she was tabbed for a second tryout, she was already focused on a business career. In 2006, she met former Fresno State quarterback John Behrens, whom she married a year later. The two athletes love to play golf together and work out at the gym. Strang-Behrens is director of annual giving for the St. Agnes Medical Center Foundation in Fresno.