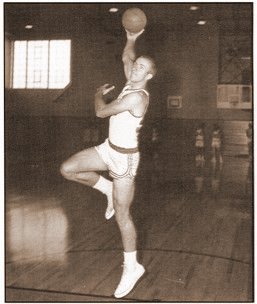 Maurice "Mighty Mo" Talbot was born and raised on a 28,000-acre cattle ranch between Porterville and Springville in Tulare County, and didn't play his first basketball game until high school. He was a star at Porterville High and Porterville Junior College before launching a record-breaking three-year career at Fresno State. He opted for a livelihood with Pepsi-Cola instead of pursuing professional basketball. The 6'5", 225-pounder did play on two strong Amateur Athletic Union teams, competing against some of the best amateurs in the country.

How did a daily routine of rising at five a.m., milking cows, going to school, milking cows again before an eight o'clock dinner prepares him for a basketball career? "As a kid on that cattle ranch, I was always in great shape," Talbot explained. "When we had time, we ran up and down those hills around the ranch just out of boredom. I didn't see my first movie until I was a freshman in high school." Talbot grew six inches from 5'10" to 64" the eighth and ninth grades. He was pretty slender, but by the time he reached high school, Talbot had bulked up to 210 pounds. His father wanted him to play football, but he was too big for the freshman team and had to play on the junior varsity which helped to toughen him. Talbot was playing intramural basketball when high school coach Al Nelson spotted him and asked him to come out for the team. Nelson started teaching Talbot the fundamentals, along with tipping, hand-eye coordination drills, and lay-ups.

"My junior and senior years, I averaged around twenty points a game," Talbot said, "We had two excellent guards and another good forward, so they couldn't concentrate on stopping me. I played center most of the time, but some forward. Our gym held 1,500 people, so we had good turnouts." Talbot's next stop was Porterville JC for two seasons under Coach Jim Maples. Talbot had grown another inch and was highly recruited by about thirty schools, but he focused on UCLA and Fresno State. UCLA's John Wooden came down to his in-laws' house as Talbot was married with one child and another on the way. "I made two visits to UCLA, but Los Angeles just wasn't me," Talbot recalled, "Part of me was sorry I didn't take the offer, but I had played with several Fresno State players on the AAU team and I was comfortable playing with the people who actually recruited me." He started working at Pepsi while at Fresno State and continued there for forty-three years. "My typical work day during basketball season was to get up at six a.m., go to school, basketball practice, then work until eleven o' clock. Go home, sleep, and do the same thing the next day," Talbot said. Despite the lack of sleep, Talbot became one of the best combination scorers, rebounders, and defenders in Fresno State history. He remains the all-time Bulldog free throw leader, with 418 out of 570. He is sixth in points with 1,480, fifth in scoring average (19.5), third in rebounds (865) and third in rebound average (11.4). Talbot had two thirty-eight-point nights and another thirty-point game.

Fresno won the conference championship all three of Talbot's seasons and he was All-CCAA first team for three years. When Talbot and Lonnie Hughey were teammates for a season, they were among the best tandems in the country. Talbot said Coach Harry Miller's practices were more grueling than most games. "He taught us to play tough, but not dirty," Talbot said. "I remember my first game against Los Angeles State when Bill Sharman was coach. On the opening tip-off, the LA center threw an elbow into my mouth, loosening a few teeth. I went out and Loren Thomson went in. In a scuffle under the basket the LA center was flattened by Thomson. "It was fun playing for Harry and Fresno State. [During) most of our home games, the fire marshal had to close the gym because it was standing-room only." Miller said Talbot was quick and strong: "One of the best combination boardmen and scorers I ever had."