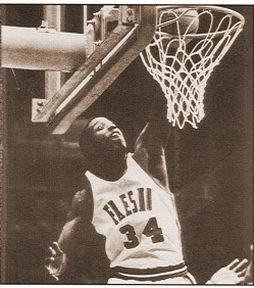 Bernard Thompson was a prolific scorer for Fresno State and a key member of the Bulldog basketball team when they won the historic National Invitation Tournament title at Madison Square Garden in 1983. Teammate Ron Anderson and Thompson were the "Bookend Forwards," the outstanding offensive and defensive tandem for Coach Boyd Grant's style of play -heavy on teamwork and defense. Under Grant, the Bulldogs were 194-74 with four titles over nine years. After excelling at Fresno State, Thompson was a first round draft pick in 1984 by the Portland Trailblazers. He played six seasons in the NBA with the 'Blazers, Phoenix Suns, and Houston Rockets. Thompson was recruited to Fresno State University by assistant coach Jim Thrash, who had scouted Thompson at South Mountain High School in Phoenix. It was early in the Grant era, when the coaching staff also brought in Rod Higgins, Bobby Anderson, Bobby Davis, and Tyrone Bradley. At 6'6" and 210 pounds, Thompson had a great career at South Mountain as an all-round performer. He was hoping to primarily play guard at Fresno State, but ended up taking on all five positions at one time or another. "Bernard really sacrificed for the team," Bradley said. "He was so quick and he could move the basketball, but we needed him to play more at the forward and center positions and he just got in there and worked his butt off. Obviously, it paid off for us, and him as well."

Bernard made the All-Pacific Coast Athletic Association freshmen team in 1980-1981, second team All-PCAA in his sophomore year, and then won first team All-PCAA honors for his final two seasons. In 1983, United Press International named him an Honorable Mention All-American, and in 1984 he won that honor again with the UPI and also with the Associated Press.

Thompson broke records at Fresno State, including shooting fifty-eight percent from the field. Bernard averaged sixteen points a game during his junior and senior seasons and twelve points a game during his four years as a Bulldog. He was a career seventy-five percent free-throw shooter and was one of Grant's great defensive players with 560 rebounds, 188 assists, and 151 steals. A highlight of Thompson's stint at Fresno State was the team's 69-60 NIT victory over DePaul University. The Dogs had lost a chance to play in the National Collegiate Athletic Association tournament that year on a three-point defeat to University of Nevada, Las Vegas in overtime in the PCAA tournament. Grant accepted an invitation to play in the NIT, and the Dogs knocked off University of Texas, El Paso, Michigan State, Oregon State, and Wake Forest to finally face DePaul at the Garden. A pass by Bradley down court to Thompson for the score finished off the Blue Demons as a national television audience watched and their fans at home celebrated. Thousands gathered on a parade route and at a campus celebration when the Bulldogs returned to Fresno. It was fitting that Thompson-the steady, quiet leader-scored the basket that won the game.