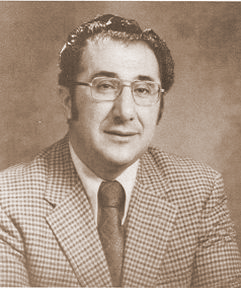 John Toomasian was born in Roachdale, Massachusetts. His father passed away when he was very young and when his mother, Genevieve, remarried, the family moved to Waukegan, Illinois, where John met a youngster by the name of Vic Graham. John and Vic liked to play baseball, basketball, and football when they weren't in school. Vic Graham had a brother, Otto Graham, who went on to become a football, basketball, and baseball player at Northwestern University, and later, an NFL AlI-Pro and Hall of Fame quarterback. "Otto was my idol growing up, and in my eyes, he was at least as good in basketball and baseball as he was in football," remembers John, "He was three years older than Vic and me, and he was a wonderful influence on both of us. He helped us in learning how to play." John was an original "gym rat' in his high school and post-high school years.

He didn't start to grow into his 6' 1", 185-pound frame until he was a sophomore at sixteen. As he grew, he was recognized as an athlete who had size, strength, and moxie. After high school, John enrolled at the University of Illinois and went out for basketball.. "with 235 other kids!" “I was the last man on the third team," says John, "It was really competitive." He enjoyed the team and was working his way up the minutes per game ladder when the war broke out. Like so many others, he put his studies and basketball playing on hold and joined the U.S. Army. During his time in the service, one of the places that John was stationed was Pinedale, just outside of Fresno. While there, he played on a service basketball team and it turned out to be a great experience for him. "We played a lot of college teams like Stanford, San Jose State, and UCLA, winding up with a 34-0 record. I became a better shooter and was more aggressive around the ball. I loved the team and I fell in love with Fresno, too," says John. "Fresno was rural in those days, Fresno High was on the outskirts. Fresno seems so much smaller now, back then, there was sure a lot of wide open spaces." As the war was winding down, John decided that Fresno was where he wanted to be. He continued his schooling at Fresno State and it was a dream come true for Toomasian, who got his degree in history and political science with a minor in physical education while playing for the Bulldogs on the hardwoods.

At Fresno State, John logged a lot of basketball time on the court and concentrated on his studies. He also met two people who would have a profound effect on his life, Karl Falk of Fresno State and Erwin Dann, who was on the Fresno Unified District School Board. "It was Erwin who helped me realize what I wanted to do in life, to teach and coach and he helped guide me along that route." John started coaching at San Joaquin Memorial from 1950-1951, moved to Washington Union from 1952-1953, then transferred to Roosevelt from 1953-1957, and followed up with five years at Edison High from 1957-1961. John was a winner everywhere he went. The philosophy that he taught his players was for life on and off the court like his three A's-academics, athletics, and activities and the three C's-communication, companionship, and compatibility.

John Toomasian was offered a position as assistant coach during the last few years of Joe Kelley's great career at Fresno City College. "My respect for Joe Kelley was so high,"remembers John, "After I got the Rams job, I vowed to myself I would try to keep the Ram spirit Joe had created. He was a phenomenal coach and I learned so much from him." Toomasian would go on to coach basketball at Fresno City College for thirty years, coming away with a record of 407-201. He won Coach of the Year awards at both the high school and junior college levels, while leading his teams to many championships. Serving two stints as the FCC head coach, John led the Rams to nineteen victories or more in ten of his fourteen seasons. John was inducted into the California Junior College Coaches Hall of Fame, and in 1978, he went to New Zealand for two years to serve as the director of the New Zealand Basketball Federation. Toomasian was also an author of the Prep Al-American Basketball Scorebook that is still used all over the world to this day. He then compiled scorebooks for volleyball, baseball, and softball that continue to be popular. As a dedicated teacher, coach, and board of education member, Toomasian never missed a teaching or coaching day from his first assignment in 1950 to his retirement. Like Otto Graham, he was a positive influence to all of the youngsters with whom he interacted.