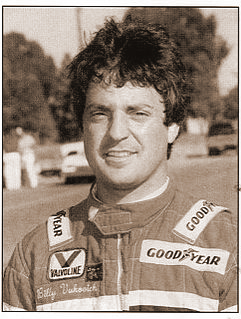 When Billy Vukovich III was fifteen years old, he announced to his parents that he wanted to drive race cars for a living. It was not a surprising goal: he was the son of racing champion and veteran Indianapolis 500 participant Bill Vukovich, Jr. and the grandson of racing legend and two-time Indy 500 winner Bill Vukovich. Still, Bill Jr. was concerned for his son. He knew of the dangers that lurked around the corners and on the straight aways of the racetracks when driven at such incredible speeds. He had firsthand experience as a driver of these fast machines, and remembered what it was like for him, at age twelve, to lose his father to a terrible racetrack accident. Bill Sr. was on his way to winning a third consecutive Indianapolis 500 title when he was killed.

He certainly didn't want to lose his son. But Billy lll persisted and showed that he was willing to take it one step at a time and learn everything about the racing business. He started out working as a member of the crew, learning the dynamics of racing, and then drove midgets, modifieds and super-modifieds. He was a fast learner and had a good "feel" for the track. In time, his father and mother, Joyce, could see that he was a talented driver, and as the championships started to pile up, they recognized that he was accomplished in the art of racing as well as its technical aspects.

Billy began his professional racing career in 1981 at the age of eighteen. He won numerous championships in Central California and collected Rookie of the Year awards in idgets, modifieds and hen supermodifieds in 1982 and 1983. His first major race was in 1984 at the Phoenix Speedway the next couple of years, Billy dominated the United States Auto Club’s super-modified division, winning twelve of the seventeen races while tying the ESAC record for consecutive victories held by Hall of Famer A.J. Foyt. This record earned Billy a shot at Indy, and he was ready.

In 1988, Billy finished 14th in his first Indianapolis 500 race, earning the Indy Rookie of the Year award, just like his dad had in 1968. His appearance at "The Brickyard" also established the Vukovich trio as the first three-generation Indy 500 family. The next year, Billy finished 12th in the world-famous race and in 1990, a blown engine forced him out and he finished 24th. At twenty-seven years old, Bill had gained recognition as a premier driver who would be a main focal point of auto racing for years to come. A little over five months later, in November 1990, Billy died while testing a sprint car at the Mesa Marin track in Bakersfield.

His death was shocking. Not only did he have a great future ahead of him in racing, he was known for his unassuming and kind manner. His untimely death saddened so many, from his hometown of tiny Ahwahnee to race fans throughout the world. At Yosemite High School, where Billy Ill graduated in 1981, the auto shop is named in his honor, as is the school's new electric signboard, which greets students and visitors every day. His parents put on a golf tournament in his name every year that raises half a million dollars for the school in scholarships as well as various other charities. The many friends and fans will never forget the smile and easy-going manner of Billy Vukovich III.